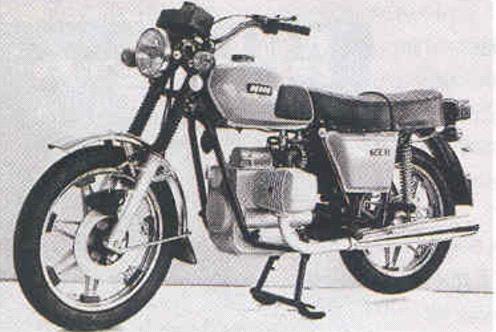 A four-stroke horizontally opposed opposed Izh and Jawa, both 500 cc were considered, same engine developed as the results of co-operation of Jawa, Izhmash and Central design bureau Surpukhov near Moscow. 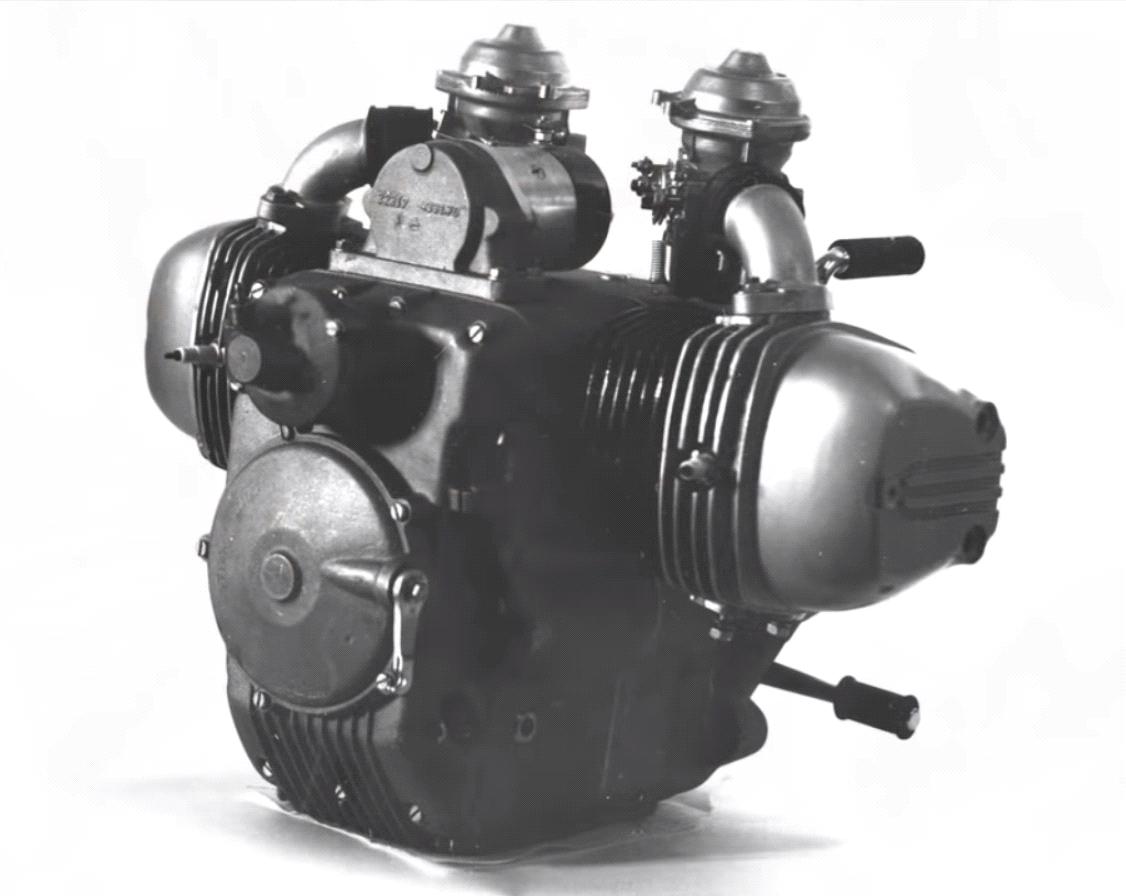 Made in 1980 as a dozen of experimental models of Jawa and fewer of Izhs, it was not mass made, as the Izh factory equipment was obsolete by that time, and soon the USSR ceased to exist after perestroika of 1985-1990s.

This cross section emphasises how compact the engine-gearbox is. The contra -rotating clutch is geared directly to the crankshaft at the front of and below the engine (top of pic). Driven by individual chains from sprockets on either side of the crankshaft, the single overhead camshafts open the valves through rockers. The hemispherical combustion chambers with domed pistons are with the two valve head. Wonder what the four valve looked like!

It was said to develop 33-36 hp, 33 Nm, had a front-placed clutch, two carbs, five-speed gearbox and shaft drive. One of the Izh is shown coupled to a sidecar. 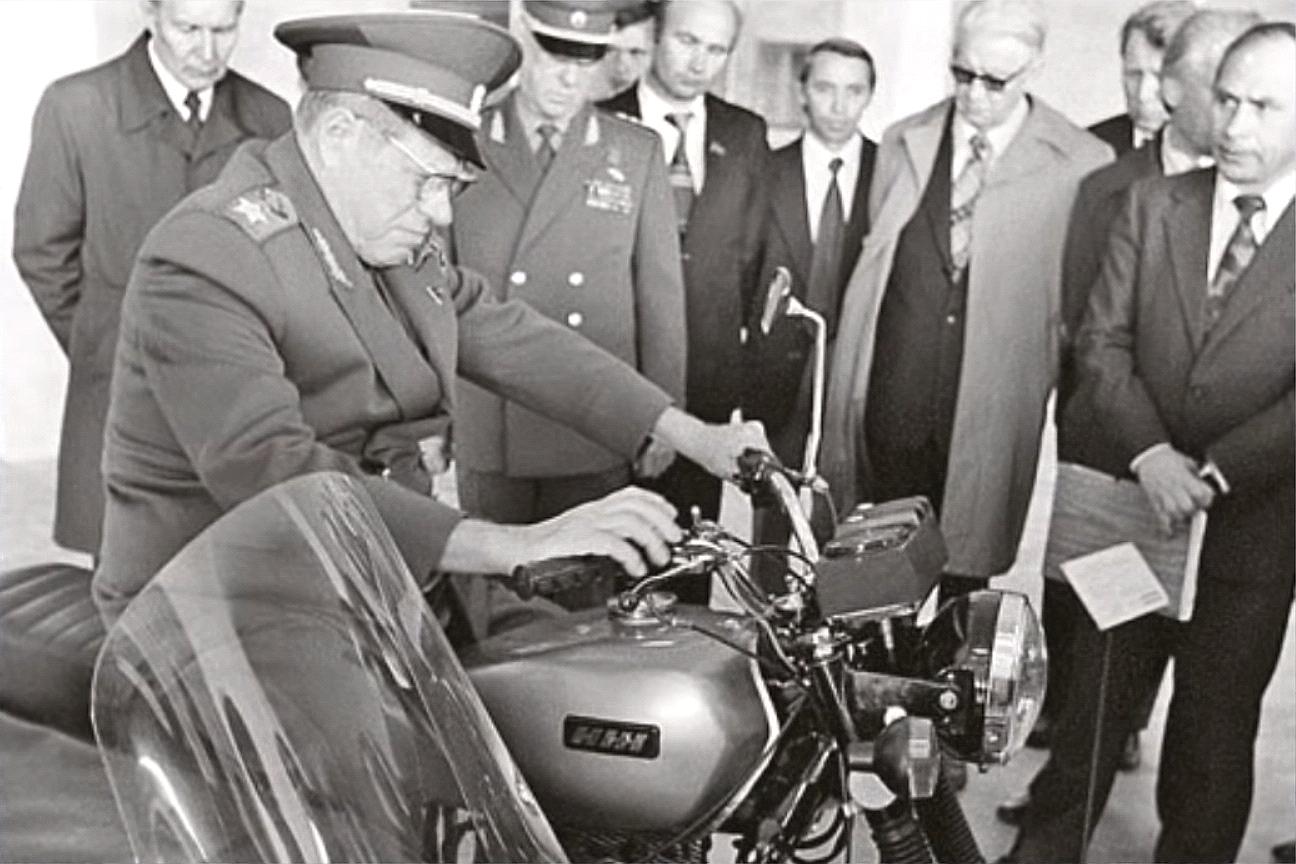 As for Jawa/Izh, it was a collaboration from start to finish. They are said to have built a dozen of Jawas and a few Izh. Serpukhov design department, known as a centre of experimental car and moto researches in the USSR made a good deal of work. The engine has intake ducts from its upper part and exhaust ones on the opposite, which speaks not for BMW arrangement, but for a scientific one together with its outer looks in general. Add front-placed clutch drum, five speed gearbox, shaft drive, but still the same as Jawa/Izh frame and suspension simple and not efficient. Made in 1980, it was doomed because the plant of Izh is said to have had an obsolete equipment which could not keep with higher requirements for precision machining. 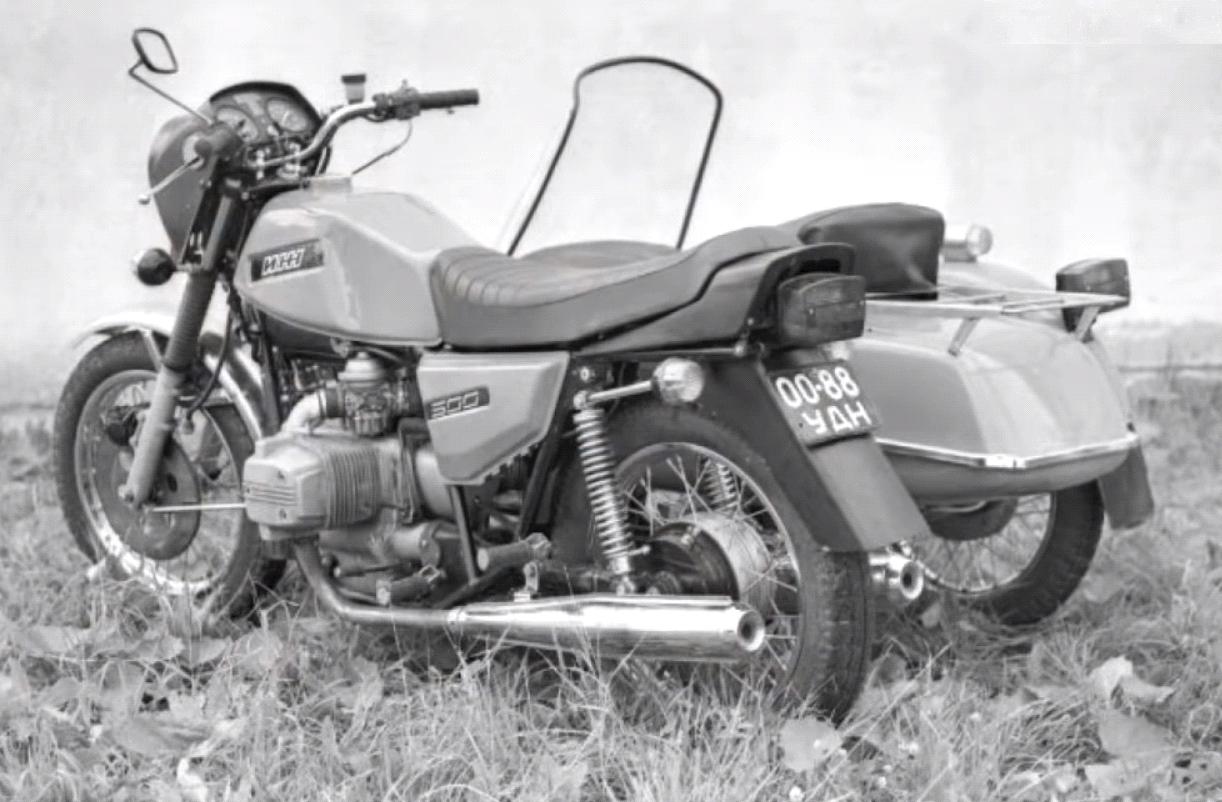 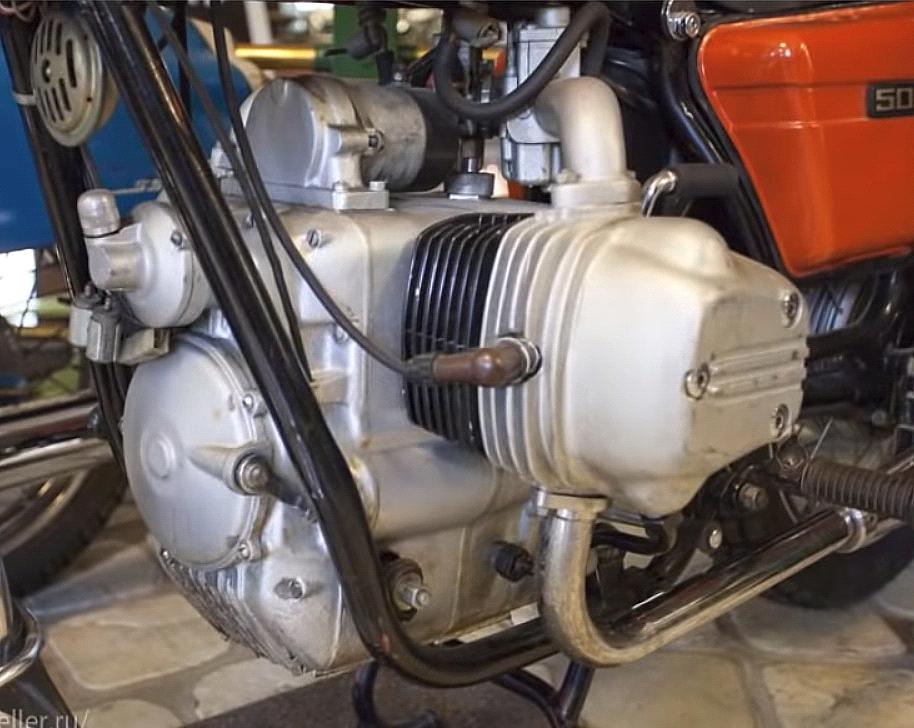 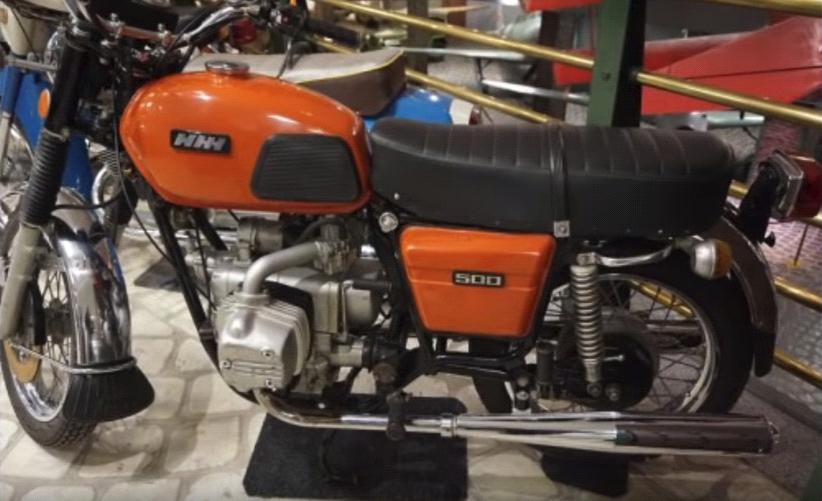 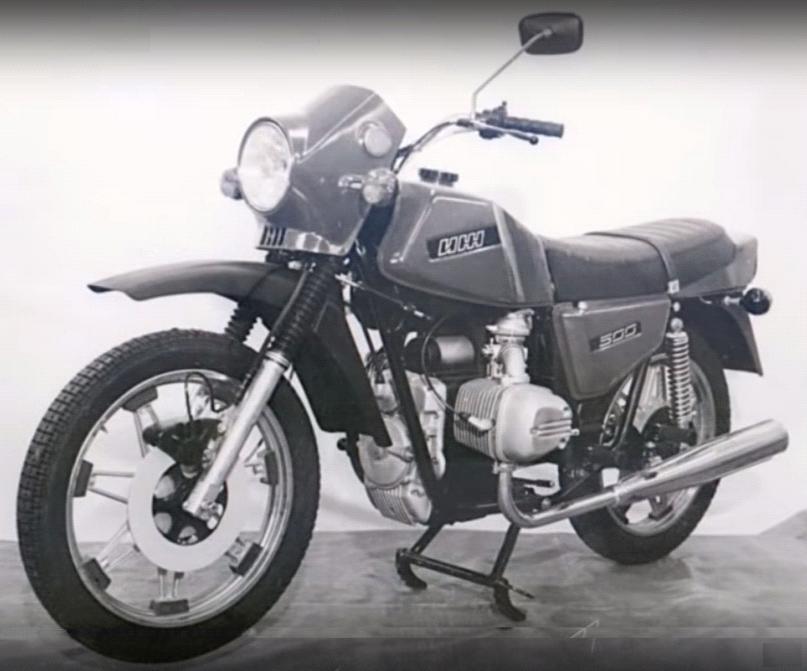 This prototype was developed in collaboration with designers from the USSR.

The block is not a BMW imitation, somewhat similar, but its own development, which is more compact and shorter than the BMW classic. Not a small track construction: although the complete engine design did not show great novelty outside the fashionable alcars, but the PTO drive , the five-speed gearbox and the starter are convincing compared to standard sprockets. There was also a four-valve version per cylinder. -Sebessegoltara, Hungary

Motorcycle from 1984, a prototype, which was produced only ten pieces. The new concept of the Jawa engine was protected by MS. author’s certificate No. 184898 by our authors Ing. V. Šantory, V. Bezouška and ing. J. Kubínka and analogous patents abroad.

The transmission system is divided into three main parts:

Such a concept allowed for a short construction of a low-center compact drive unit at a preferred higher position of the cylinders. The main benefit of this solution was to compensate for the effect of the rotating crankshaft on the momentum of inertia of the clutch rotating in the opposite direction. Another advantage was the easy change of the overall gear by replacing the last pair of sprockets stored between the gearbox and the articulated shaft. This problem often complicated the coupling of the motorcycle with the articulated shaft.

The air-cooled engine has an OHC chain drive chain camshaft, a clutch in an oil bath, a five-speed gearbox and an electric and foot starter. The entire construction of the machine was the work of the Research and Development Center of Jawa, and in addition to the above-mentioned copyright certificate, it was also protected by other copyright certificates 212952, 201233, 198716, 192893 and 192167.

The chassis of the motorcycle has been solved with production links to similar types of two-stroke Jawa motorcycles. 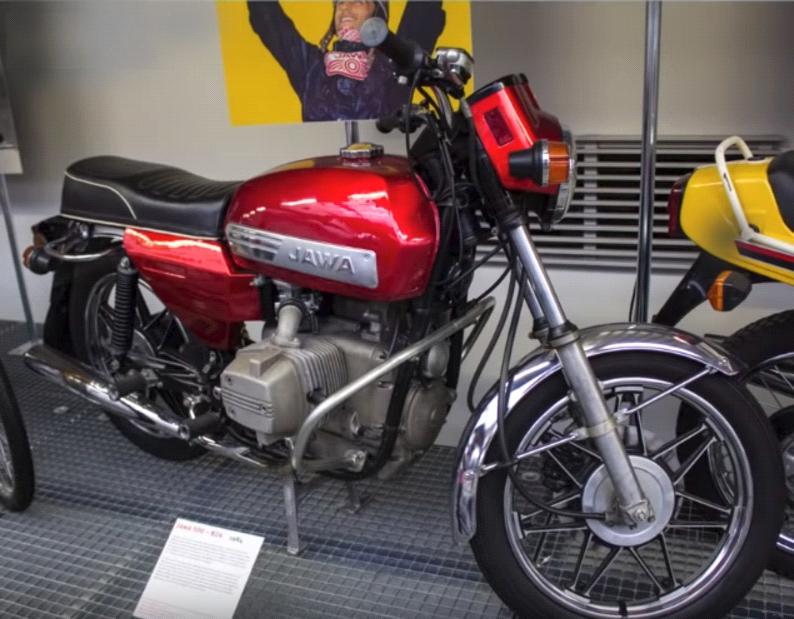 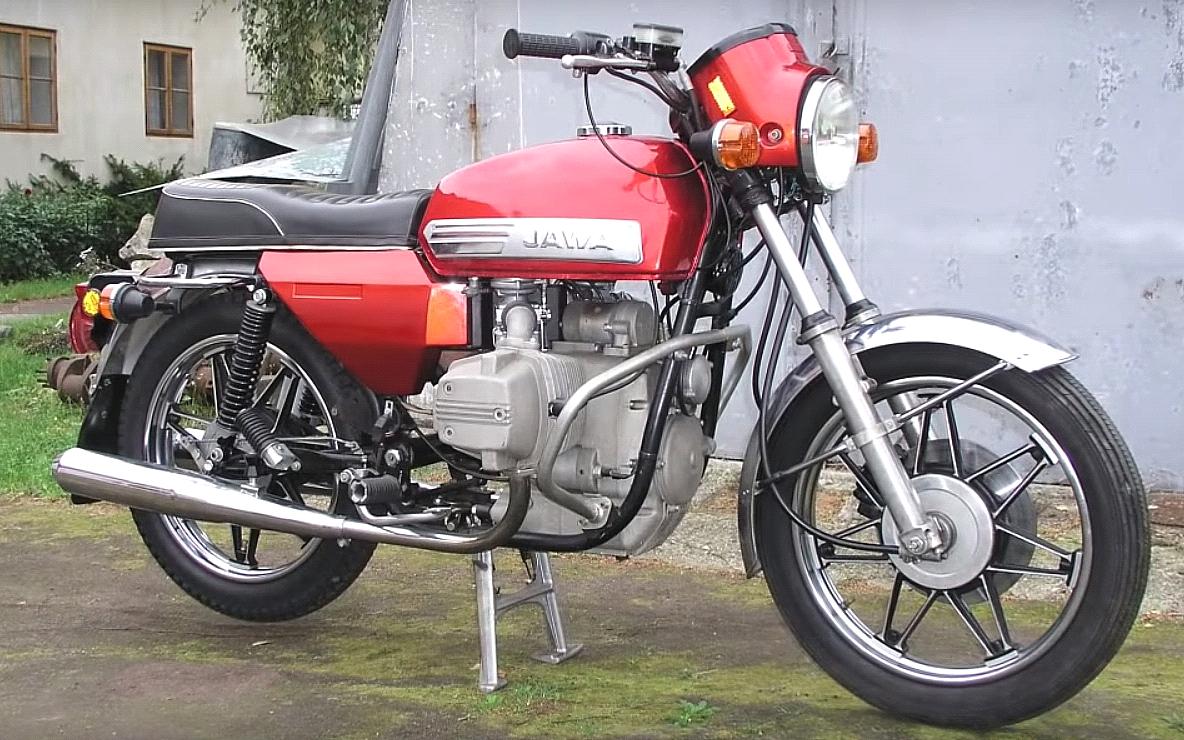 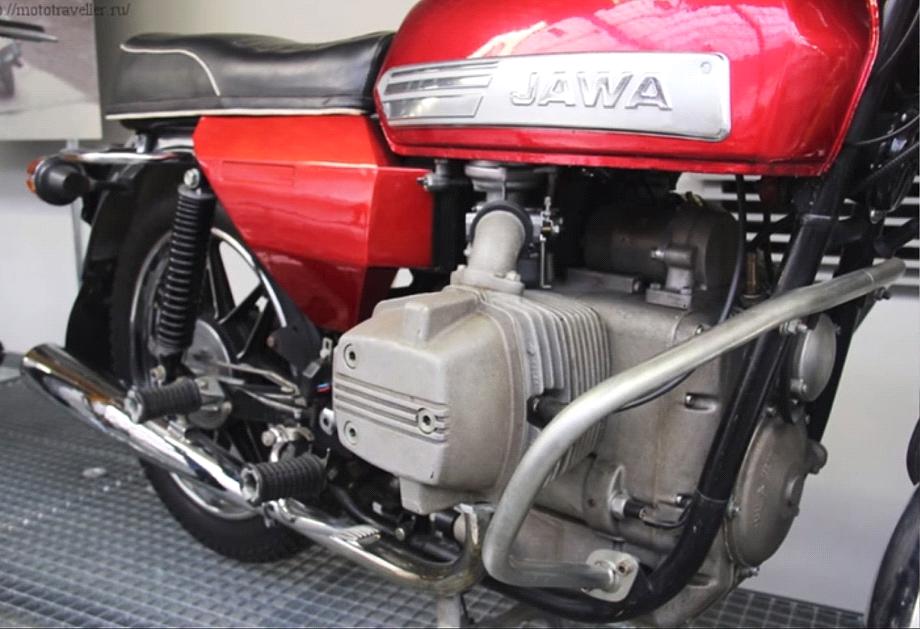 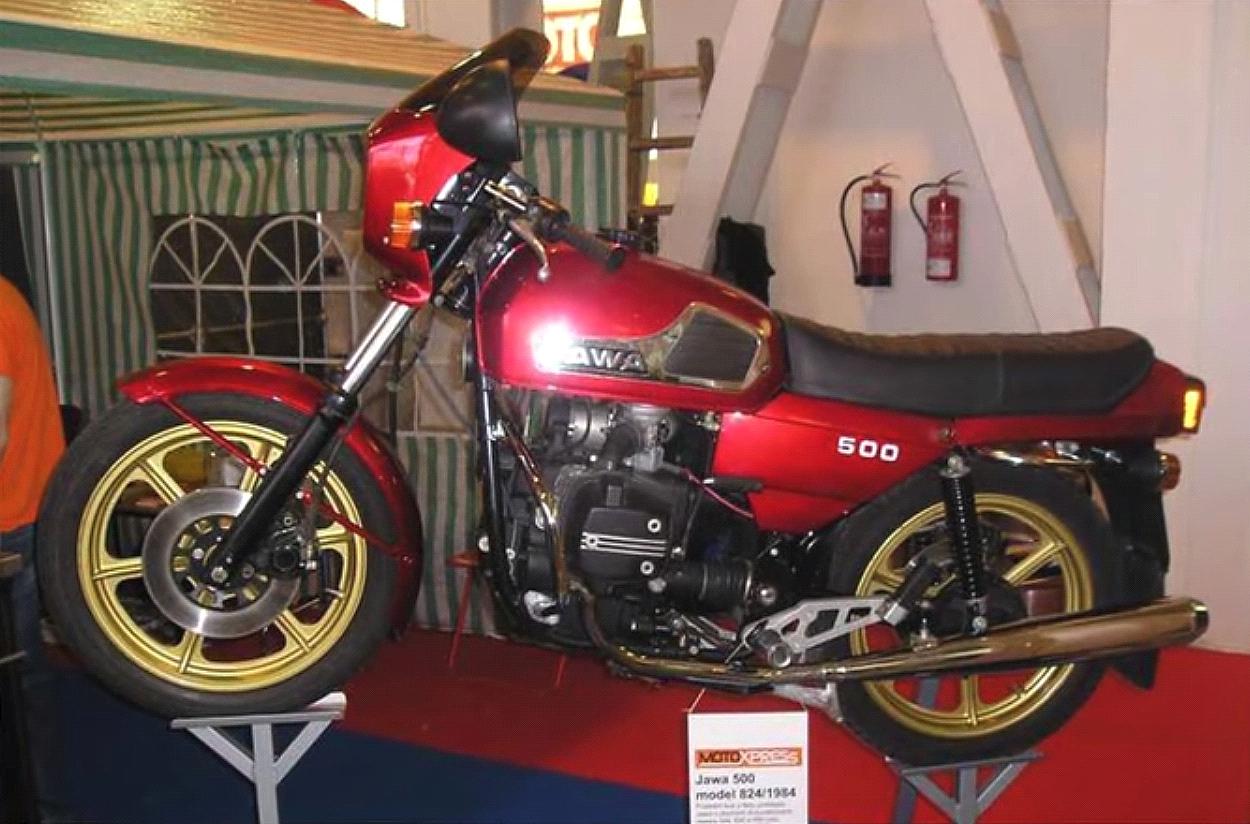 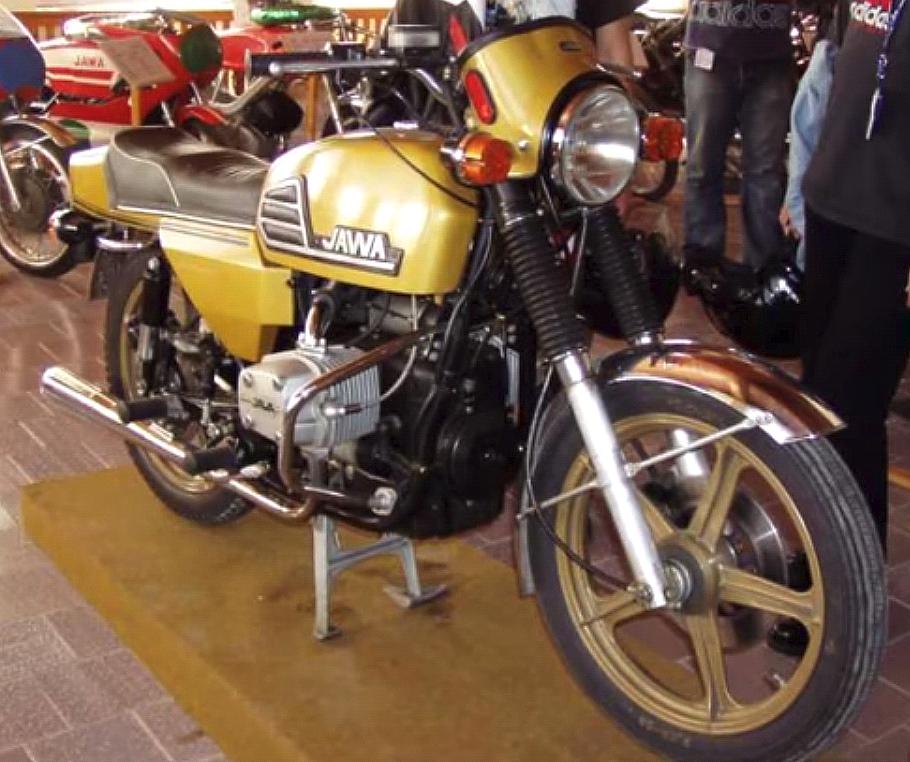 This is really a bullet and a masterpiece of those years, not for nothing that she was a dream. There are very few of them. – Danya Palych 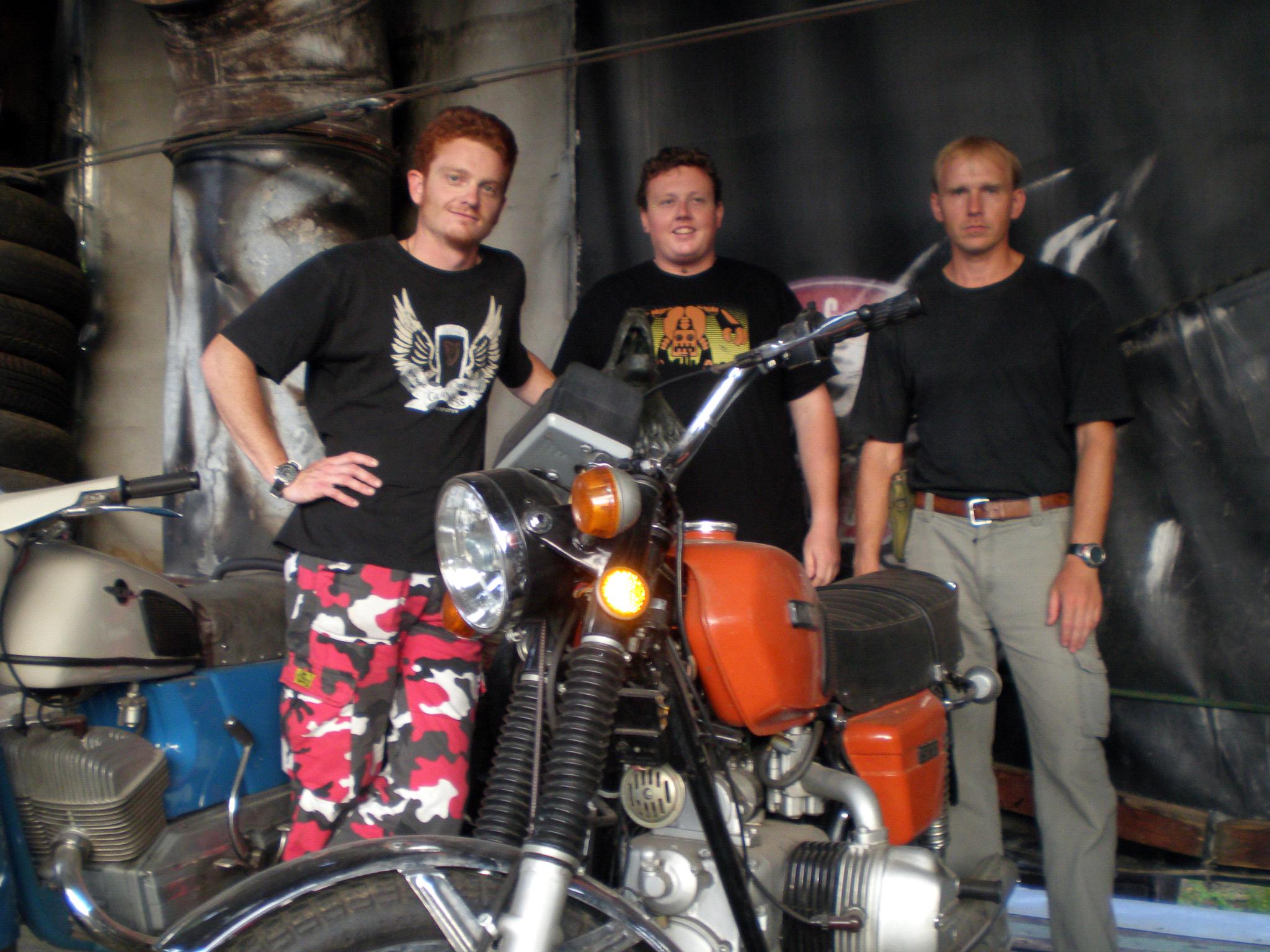 The engine is not Czech but Russian. That’s when they made 12 engines in the USSR. – Bohan Novotny

The superb and innovative engine, with five speed gearbox underneath, to allow the contra rotating mainshaft to counteract torque reaction. Note the cylinders are cleverly rotated 90 degrees from normal practice to put the exhaust below and the inlet above the cylinder. This permits the carburettors to be positioned above the engine away from the riders feet.. All this results in a shorter wheelbase than other boxers.

On the prototypes the overhead camshafts operated two, or in the case of the sports model, four valves per cylinder. The gearing could be changed by the owner, presumably to suit solo or sidecar. Both electric and kick start were fitted. The cylinder configuration was just over-square at 68mm bore by 67mm stroke. Output was 27 Kw giving a very respectable top speed of 150 km/h.(93mph) Fuel consumption was 5 litres /100Km (52mpg), and total weight 175Kg (388 lb). – Job Grimshaw 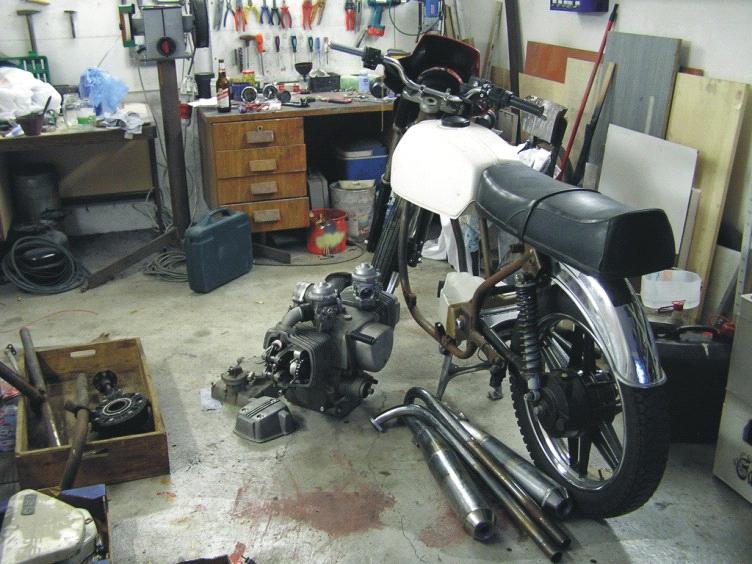 Perhaps you might see this one riding down the road one day. But is it a Jawa or an Izh?