Some short poems for you

“Away upon the hill the men are making hay…..
Down below the hill riding fast away are the Cossacks bold…….
Would you choose a bike.
Rather than a wife?
Cossack strange and bold?
Let the others marry,
We’ve no time to tarry,
But my bike will be a comfort,
And a friend upon the road!”

Eugene has translated this little gem for us 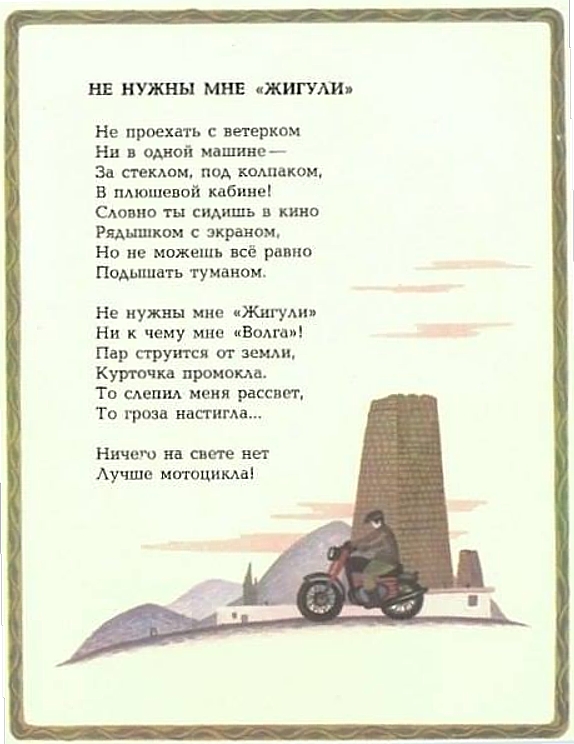 You cannot ride a car
With a wind blowing
To your face behind a windscreen
A tinned potato sitting on a sofa
Sitting in a cinema
Just in a fore-row
But you cannot breathe a fresh air
From there now.

I don’t want a “Zhiguli”
And the same for “Volga”
Vapour rising from the soil
Jacket is rain soaked.
Be it twilight blinding me,
Thunderstorm be catching,
There’s nothing in the world
Better than a motorbike for me!

Translators note:
for the short poem, it is quite simple but nice in Russian 🙂 I used to translate some classical poems as a student but form English into Russian. See what I’ve done in an opposite direction. Some phrases are deliberately set in an unusual order of words (usually for melodical and for rhyming convenience). Also most of meaning from original text has been rendered quite closely (some would write a completely different poem of their own on the same topic). – Eugene

There once was a Ural from Dural,
Which you must understand is quite rural.
It was said with great fare,
“Wow, this bike must be rare!”
It even won the bike show in Booral.

Now the roads meet at Booral and here was this Ural
With Frank lying pissed in the sidecar
He said with a frown “Would you help me down?”
“There must be a pub in the next town”.

Now the Ural it won,
But the Dnepr got one,
Cozz he’s still back at Stroud with a sheila.