In year 2011 “Zavod in Degtyaryov name” (ZiD) factory of Kovrov celebrated 95th anniversary since foundation and 65 years since the start of motorcycle production there. Now it is time to recall…

When I worked in Kovrov’s plant having a moto-weapons specialization there circulated a saying: “the Japanese stole our motorcycle design! As they have assembled that it came out to be a machine gun, one more attempt – again machine gun. So they turned for consultation to expert on Russian affairs, who replied: “did you steel addendum on design changes, additions?..” Every joke has a part of joke in itself and it was not just accident that our weapons-making plants engaged in motorcycle producing. Firstly, as the War (tr. note: WW2 or the Great patriotic war) ended demand on weapons dropped dramatically though production had to be kept at high tempo and output. And precision machinery and qualified workers could do more than lighters and cast iron pans production sort. Some foreign countries shared similar experience – BSA, Husquarna, Zundapp…

In August 1916 a small provincial town of Kovrov saw building of first workshops for “First Russian Society for Rifles and Machine guns plants” in co-operation with Danish “Dansk Rekylriffel Syndikat”. Soon it was of little business to production establishment and the plant started to function in 1920s as it has mastered famous “Degtyar” – V. Degtyaryov portable machine gun”. And in 1945 People’s Committee on armament ordered gunsmiths to master production of new type – a light motorcycle. We thank Nikolay Tubaev and “ZiD” administration for assistance in preparing of this article.

Order of motorcycles production start in plant of Kovrov town was issued in March 1946, and as soon as November first series of 59 K-125 were assembled. Designs of German DKW RT125 were given as a part of reparation after the Great patriotic war. A single cylinder, 2-stroke engine united with 3-speed gearbox had maximum output of 4.25 hp and made the 76kg machine able to run as fast as 70 km/h. Meanwhile production of the same prototype copy was established in Moscow motorcycle plant, which then was moved to Minsk. It is interesting to know that deriving from one and the same prototype machines of the two makers differed greatly in electric onboard systems installed, clutch design and outer look elements. K-125 on picture below – is one of those first series of 1946 (totally 279 machines were made that year), while a 5-digit number stamped on engine casing suggests that some parts used were fetched from Germany. 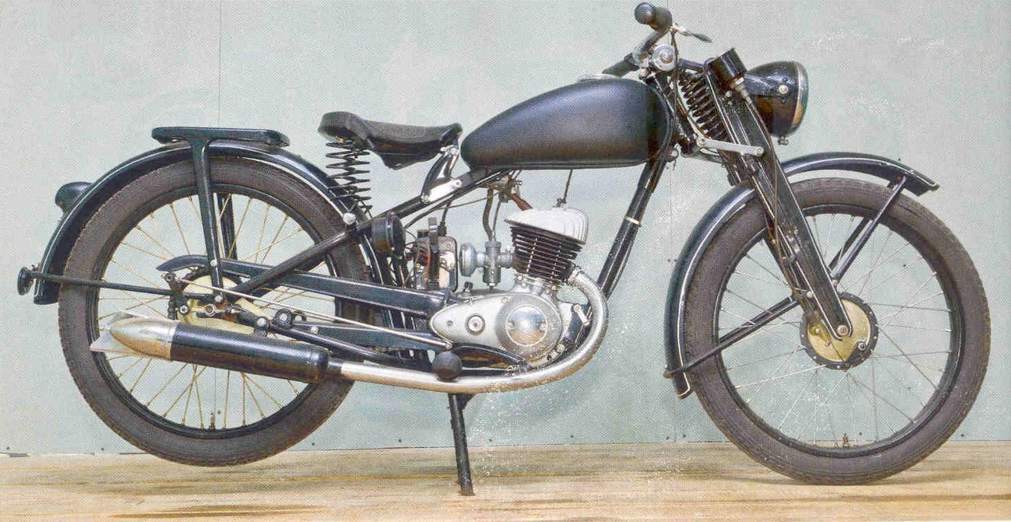 A dozen and a half of motorcycles were ordered to be given over to heads of the plant’s departments, who would take them for a harsh test-drive. Some breakages followed soon after: weak, unreliable frame and especially front fork in Russian environment. And since 1951 a modernized version K-125M entered mass production with hydraulic telescopic front forks. The motorcycle on picture survived to our days with its own original registration number plate! 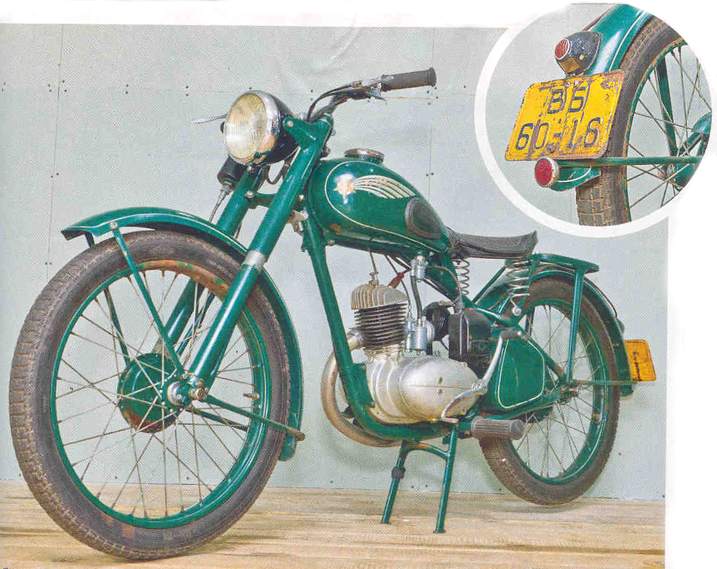 Up to year 1960 the plant made both 125cc and 175cc motorcycles, pictured – one of last 125cc series K-58 of 1958, having rear swinging arm fork (first appeared in 1955 on K-125 model), engine tuned to 5 hp, toolbox of increased volume, but main enhancement was a new onboard electric system with alternator (AC generator) which would produce ignition without battery (very deficit at those times). Picture shows motorcycle made specially for VDNKh show (Exhibition of Peoples’ Economy Achievements, located in one of huge central squares in Moscow). 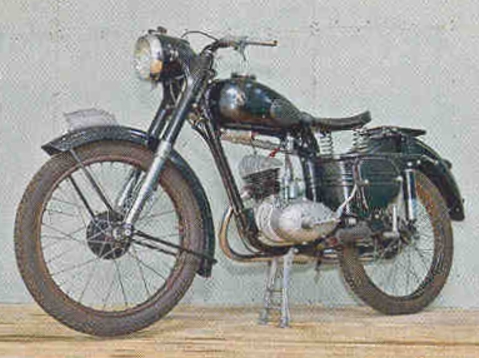 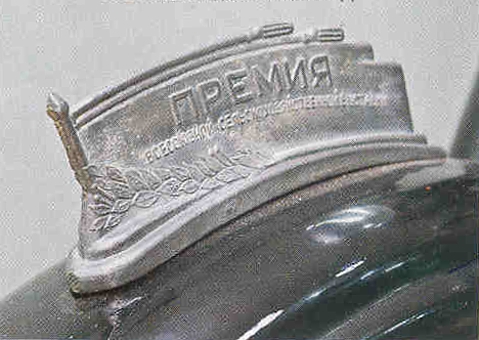 One of the rarest motorcycles of Soviet motoprom mass produced , was so-called “Kovrov-JAWA”, K175 of 1956. New 175cc engine, 8hp, aggregated to 3-speed gearbox was an original design solution (it already had a aluminium alloy cylinder jacket with cast iron sleeve), while “semi-automatic” clutch and outer design were copied outright from Czeckhoslovakian analogue model. Rumour says that the Czeckhs were so agitated having seen the machine on VDNKh exhibition that they went up to N. Khrushev himself (in a more prosaic version a disturbance waved through conveyor assembly workers as its manufacturing process was too complex). Nevertheless, “Kovrov-Jawa” were made in quantity of 400 pieces only, the same year 1956 saw a less sophisticated model of K-175. Picture shows motorcycle under restoring process. 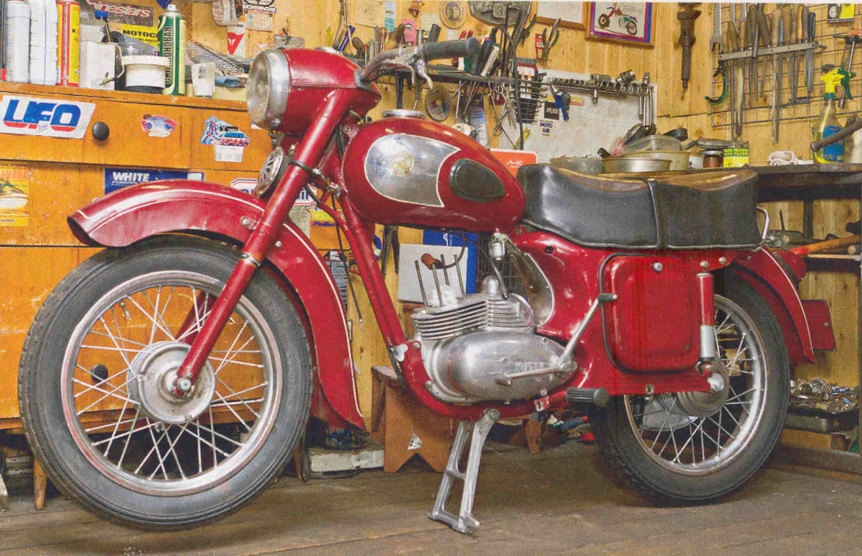 Series “K” ended by 1960′s taking away with them a DC generator with battery ignition. New electric system working without accumulator was a design trait of 175cc “Kovrovets-175A” of 1959, besides that it had a new 4-speed gearbox and front fork of advanced design without inner rods. On 5 May 1960 the plant set off its 1-millionth motorcycle. 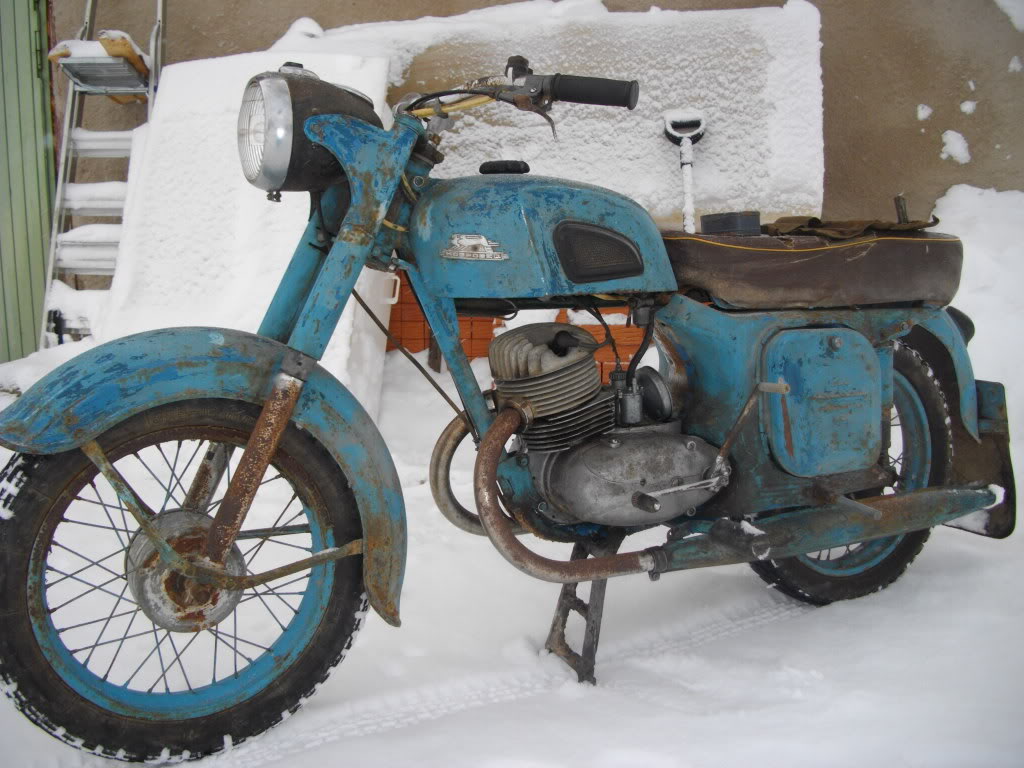 In 1963 an intervention attempt was made to enter Vyatka and Tula field with with its own motoroller (scooter). Power plant and some other parts of a 175 cc mass produced motorcycle were used. By logic this idea didn’t have success to come to mass production as motorcycles were far more in demand.

Also in 1963, the Plant’s designers made an unexpected “step back” (hint to Lenin’s phrase for country’s future “a step back, two forward”) with a new model “Kovrovets -175B” of 1963 turning back to cast-iron cylinder and one silencer. Alas! Its engine with 9.5 hp responded with severe disgrace – tended to seizures. All alloy jacket had to be called back urgently to “keep cool”. “Casty pot” was only installed in about 500 machines, a reserve of these “granny’s pots” had dusted for long in plant’s warehouse till it was recasted. 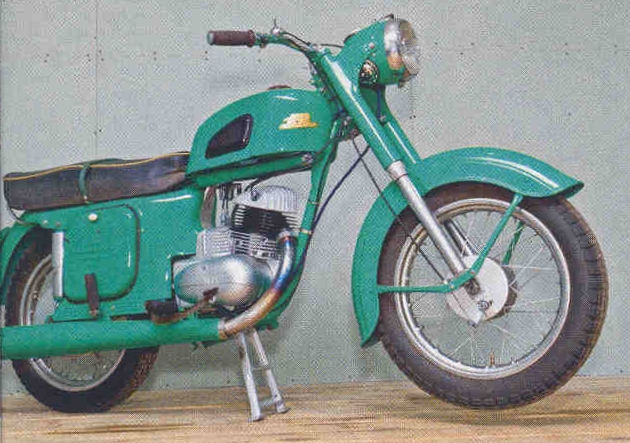 First 300 pieces series of new make “Voskhod” were assembled in 1965 and in 1967 it completely outed old “Kovrovet” from conveyor lines. New model had a rarely for that time harmonizing outer design, with engine tuned to 10hp it could reach 90km/h. For the first time motorcycle option offered a rear rack, side mirror and export version had knee guards and windscreen. 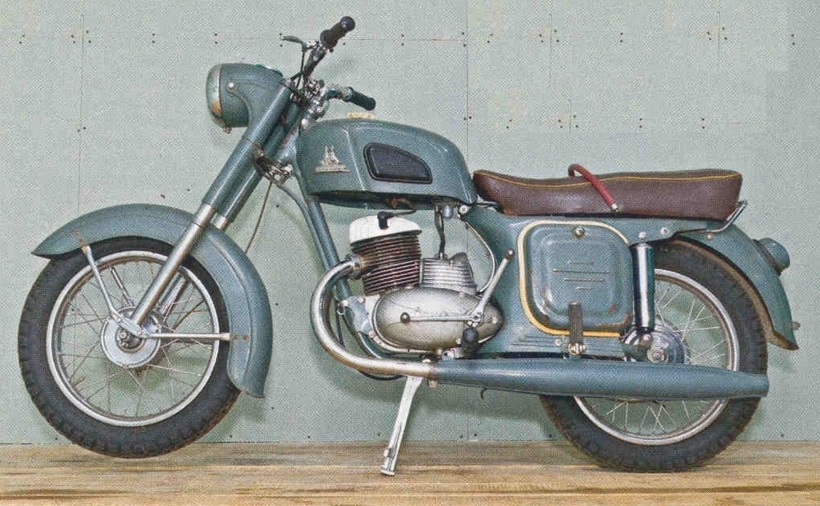 Shown on picture is one of “special” series made in 1969 to V. Lenin’s anniversary. 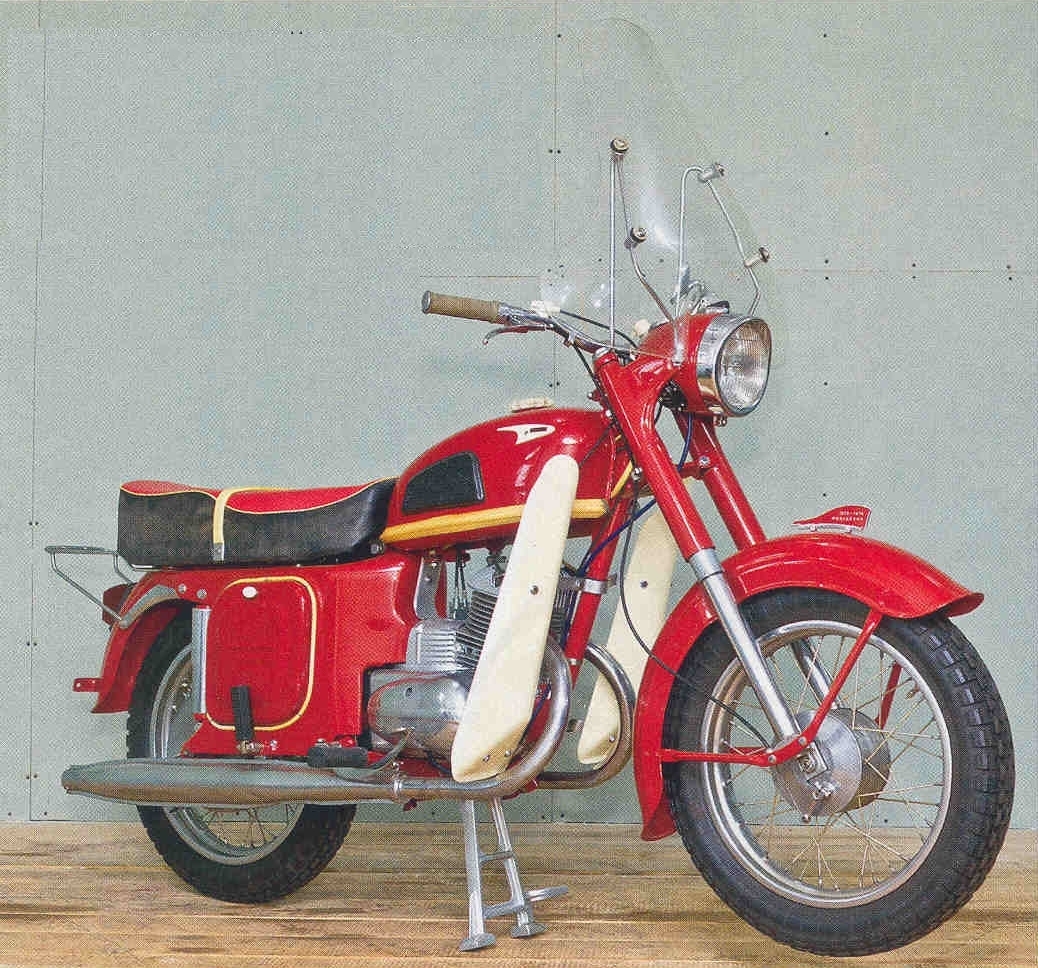 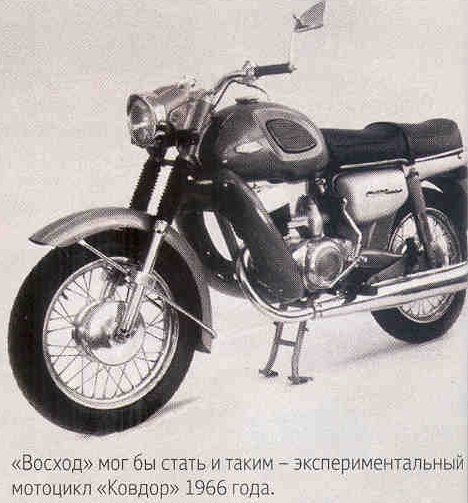 Voskhod could have become as this – an experimental “Kovdor” of 1966 pictured here. 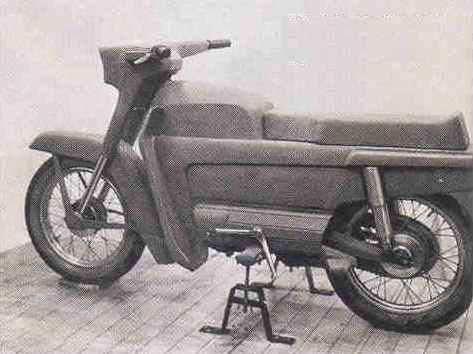 Plasticine modelling – a further development research of the 1960’s.

“Voskhod-2″ saw the light in 1972 with engine power increased to 10,5 hp new coatings and a characteristic rear rack “odd tail”, turnlights and since 1976 a new pointless electric ignition system was used. In 1970′s the plant made over 220,000 motorcycles annually, exporting to such countries as Italy, Norway, UK and Australia. (These were marketed in the West by SATRA as Cossack 175, Ed.) 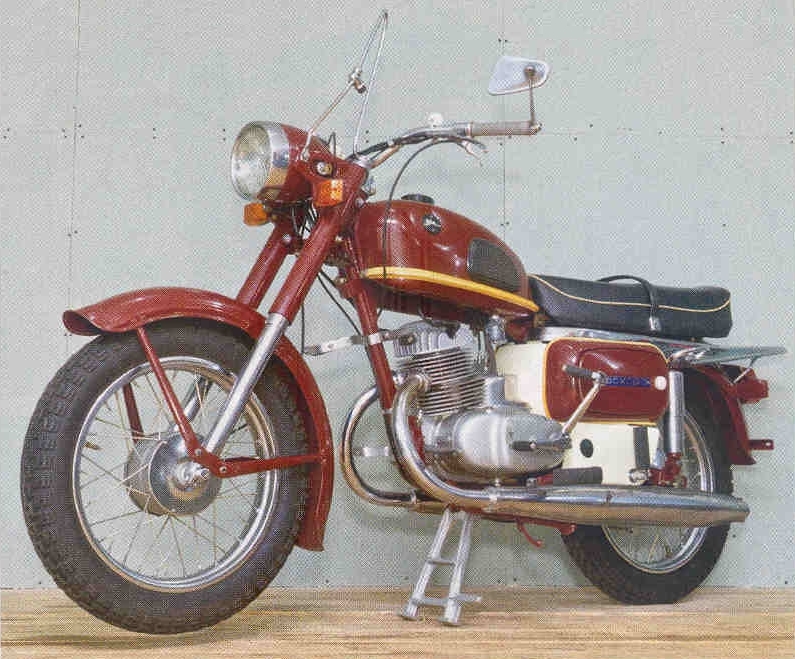 A reasonable explanation for “dead end” of this Voskhod-250 was not found yet. A 250cc, 20 hp engine, duplex type frame, max. speed 115km/h with 140 kgs of dry weight would place the plant on a higher level. Production squares, new machinery were ready… Some say that it was for war in Afghanistan that required to increase main specialization production (weapons), others hint at industry ministry chairmen favouring Izhevsk and and willing to keep the competitor down. Picture shows one of 15 prototypes made in 1980. 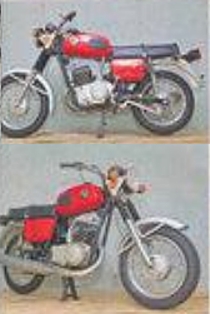 It was in as early as 1947 when the factory made first series for motocross, in 1970′s produced over 1800 machines for sportsmen every year. Special among them were “SKU” series – “Sports, Cross, Unique” made singularly for members of USSR league and factory team, competitive almost at world-level. 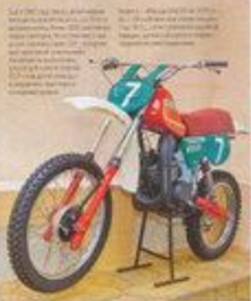 1950 marked the start of history record in road race for Kovrov plant, though this sport was not so popular as cross, pictured “Voskhod-175ShK-3″ unlike unique cross bikes was based on standard powerplant tuned to 18hp and even such it reached 130km/h with 90 kilograms of weight. 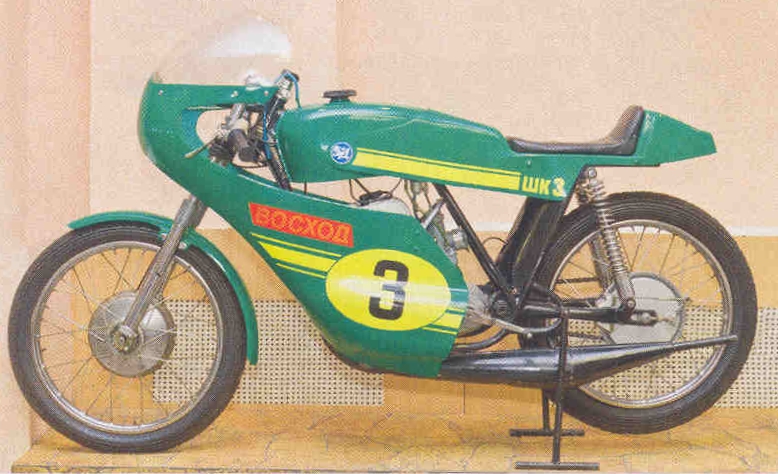 The mainstream of motoball team “Kovrovets” was constituted of plant’s laboratory for sports motorcycles testing workers, who initiated motoball-specialized machines production in 1976. On picture is “Voskhod 175SMB-3″ with 20hp engine in special duplex frame, an interesting fact is double set of pedals for brakes and gearswitching allowing rider to use both right or left leg to his convenience. 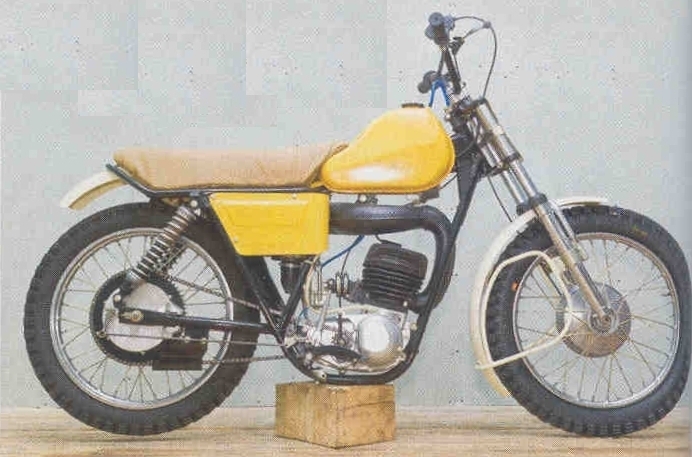 In the beginning of 1980-s Ministry of defense industry announced a competition among its 3 plants (Kovrov, Izhevsk, Tula) for a motorcycle on wide profile tires. 1st variant was an ordinary Voskhod with “big shoes on”, 2nd variant (pictured below) differed with more original design, Tula’s sample was favoured for mass production. 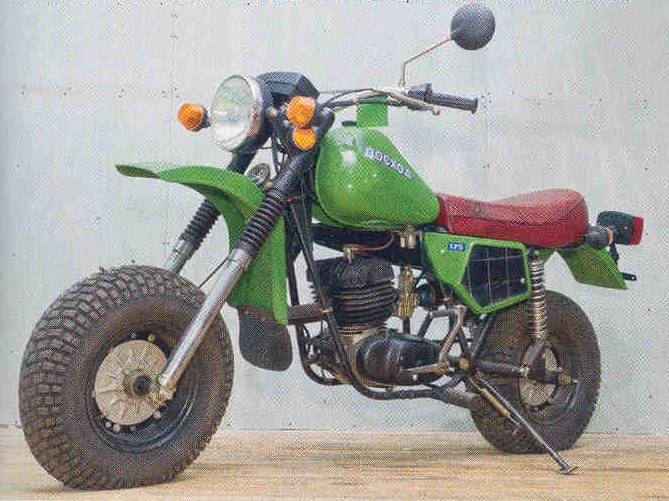 After “big shoes” mishap the plants designers had hope for motorcycle on ordinary tires. 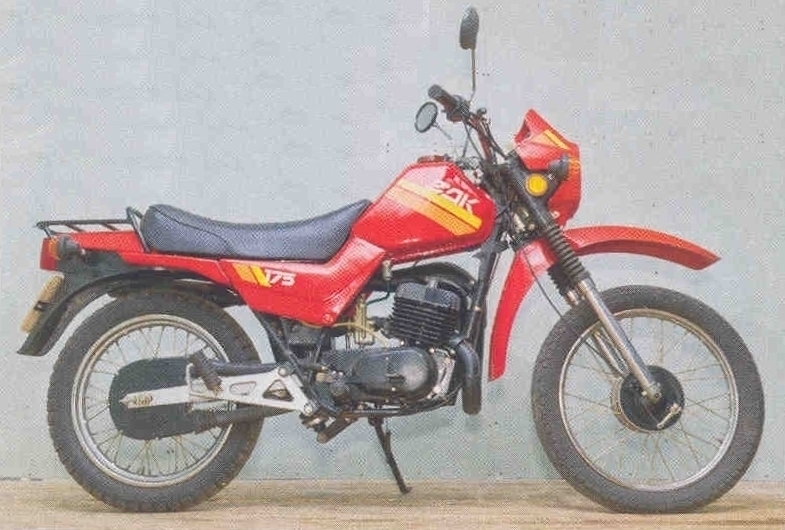 Modernized 175cc engine with leaf valve in intake duct was installed into a new frame with progressive-type suspension. The machine was widely advertised through exhibitions and printed brochures, unfortunately it too ended up with only several samples assembled.

In 1990′s as a response to slogan “Give us a European level motorcycle” “Frant” appeared as a result of design in collaboration with Italian studio of Luciano Marabese. Contemporary look, 200cc 4-stroke engine and even a 600cc version, quality parts from Taiwan and South Korea promised a 100% chance for success, as frame would dispose a 400cc or after a light modernization a 600cc engine. Only that project was born in 1998 when a sudden crisis washed away all optimistic plans.

Nowadays joint stock company “ZiD” is one of surviving former Soviet motorcycle makers with its moped “Pilot” and off-road “Robinson” being made with import engines, though. A new sample being put to tests is a trike with low pressure tires called “Barkhan” (see picture) co-work with strategic partner from China – “Lifan”. 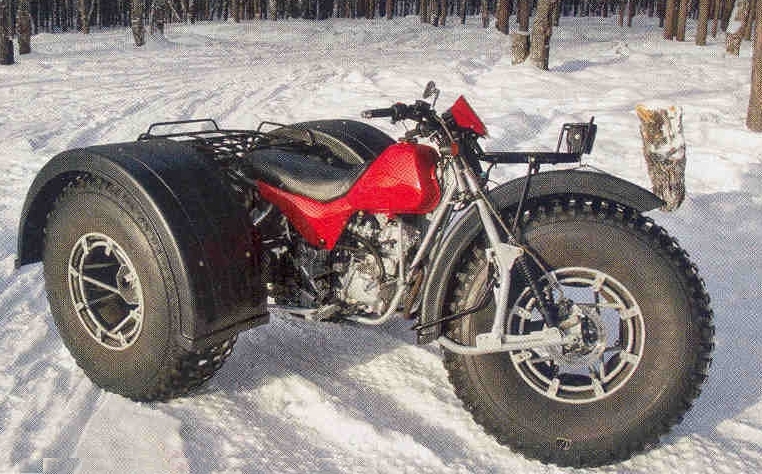 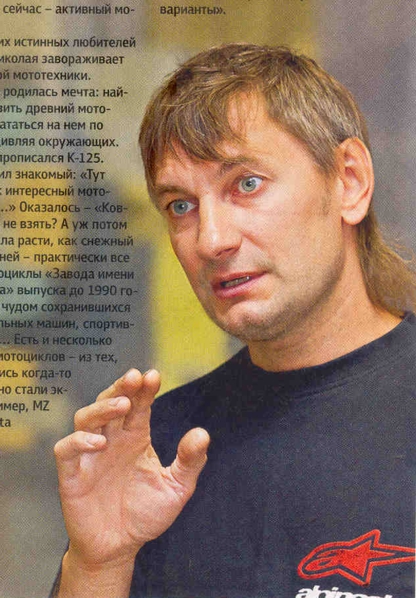 Nikolay Tubaev – not an odd person to the plant, worked there after school graduation on conveyor assembly , tool department and testing lab. A motorcycle enthusiast, trained in motocross, now active moto-tourist. His collection started suddenly and by accident, though now it encompasses almost all plant’s mass produced models and some rare as “Voskhod-Jawa”, and rarely imported in Soviet times an MZ BK350, also a Jawetta Sport. A small museum is a dream only, as few sponsors are willing to invest and own funds are not adequate.

Kovrovets/Voskhod translation ©Eugene Radchenko, Russia, especially for B-Cozz. Editing, proofreading by JD. ©b-Cozz 2013
Many many thanks Eugene!
Note: The Zid plant in Kovrov made other models, Voskhod-3 and -4 etc. You will find them elsewhere in the pages.
Some extra stuff that may be useful: 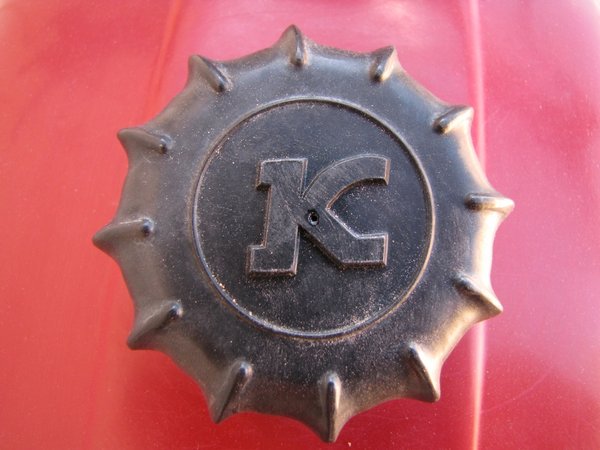 Fuel tank cap on a Voskhod-1, the K is for Kovrov 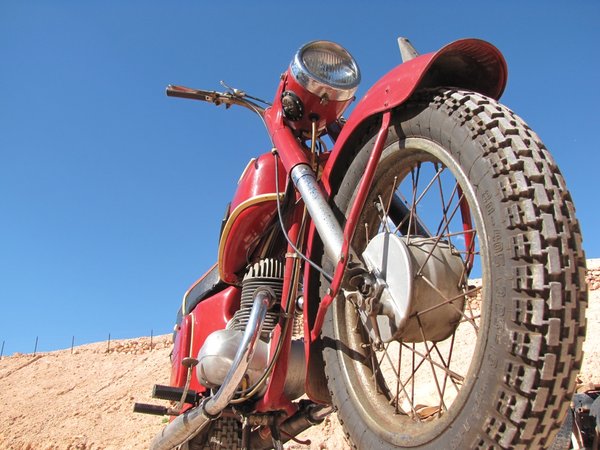 To finish, a photo of Andrew Laikadog’s Voshkod-1. Still going and that’s a 41 year old tyre

Up the mighty little Voskhods!  Not that fast, but they are just plain fun to ride!