A portrait to remember the legends of sport

Designers underground movement is a no time event and no country or nationality. And without support of brand firms, equipment and laboratories and sometimes without special education Russian “underground technical specialists” managed to create so perfect machines that brand factories specialists envied but disguised this behind disdainful grin saying “the kitchen…” But the kitchen specialists would ignore this as during record attempts it could have been seen that a talent could not have been substituted with money. 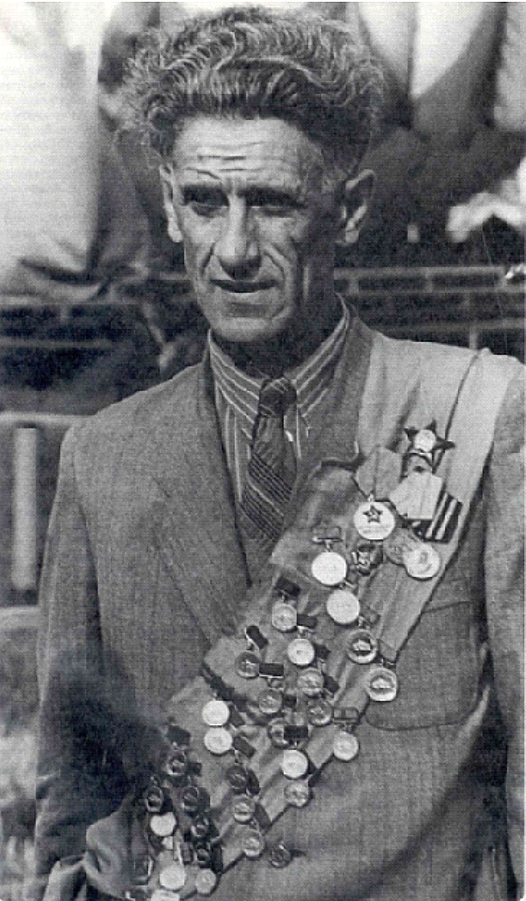 Nikolay Shumilkin, a designer of sports motorcycles, did not come up to this trade occasionally. His father was quite well-known in the south of Russia, a gifted craftsman, he founded a small factory producing small stationary engines, so-called “oils” (these engines worked on petroleum), often bought by well-to-do locals and German colonists, so the engines were named “Kometa” (Comet) that may have been read both in Latin and Cyrillic. The oils proved very reliable and simple in servicing for that time, some of them remained in work till 1950’s.

N. Shumilkin took after his father in love for craftsmanship. As a teenager he built a “motor-sleigh” with Fafnir engine, 1.5 hp. In 1928 this and designer’s name from Rostov-on-Don got a short note in “Za ruliom” magazine (“at steering wheel”). A few years later Shumilkin received a technical passport for motorcycle “Harley-Shumilkin”, which he assembled from parts found on a dump and with a self-made engine.

By that time Shumilkin was already a professional in making chill moulds – forms to cast decorative parts from non ferrous metals. In 1936 he moved from Rostov to Taganrog as there the Taganrog tools plant started production of motorcycles – a whole life occupation of Shumilkin. TIZ-600 based on English prototype BSA, was nicknamed “roe” because of tilted forward cylinder, a reliable and tough design machine with a sidevalve engine was too heavy and unsuitable for races. While nothing of sporting was required from such, as AM (“TIZ AM-600″) stood for “army motorcycle” and 600 – engine capacity. 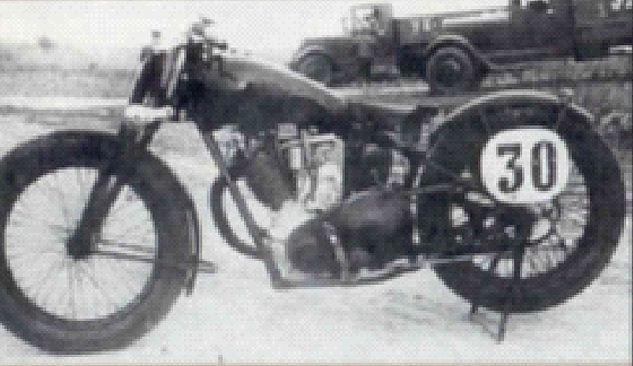 TIZ- Kometa-1, pictured in 1938, oil tank mounted under seat, front alloy part of the engine is cut off, where TIZ AM-600 had engine oil reservoir. New cylinder and overhead camshaft cylinder head with pin springs.

In 1937 Shumilkin re-designed the engine radically, making a new cylinder with overhead camshaft engine head, decreasing bore from 84 to 77.5 mm, resulting in capacity 495cc in order to fall “under 500cc motorcycles” international category. The engine’s piston he cast from light alloy and cylinder head from aluminum bronze, installed pin springs instead of spiral ones, made “dry casing” oil circulating system with a separate oil tank, left only two top gears in gear box, took off front brake and with some other tricks made the machine lighter. Overhead valves driven by pushing rods, increased compression ratio, megaphone type exhaust pipe, “Amal” type carburetor gave a desired result in power rise from 16.5 to 22 hp and top speed jumped from 95 to 138 km/h. 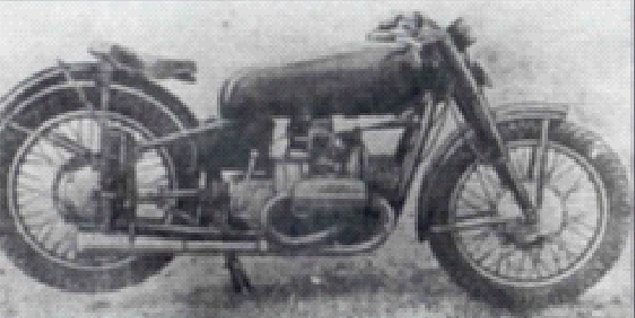 BMW-Kometa-2 with 19” wheels and off-road protector, a charger was put in front part so the whole power plant was moved 90mm back 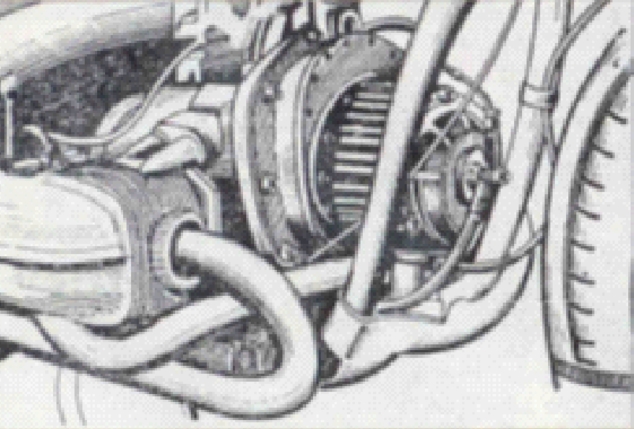 Charger of “Zoller” type was driven by gears from front part of crankshaft. Under it is a T-junction with a safety valve. Oil hose is mounted to the charger’s front end for lubricating its blades.

In 1939 Shumilkin modernized the machine, and named it “TIZ-Kometa-1″. He was first among Soviet designers who got use of a charger and power rose to 30 hp with top speed 157 km/h – an incredible result for those times.

Staff of TIZ plant and Shumilkin relations went for bad and he moved to Leningrad “Red October” motorcycle plant. A re-designed plant’s 350cc model “L-8″ by Shumilkin reached 137kmh at 1km strip with flying start. During the Great patriotic war Shumilkin cast spare parts for aircraft engines in near to front repair workshop. Each “brand piston” had “N.Sh.” label on it.

All these years Shumilkin gathered carefully technical information on BMW motorcycles. Unfortunately none of captured racing BMWs got into his hands, though he knew well all weak spots of the German engine. After the war he worked on a new machine “BMW-Kometa-2″, based on BMW R-51, one of the best 500cc motorcycles of that time. Of interest to him were pin springs, short pushing rods of valve mechanism and lower centre of mass of an opposite engine. BMW R51 had two camshafts installed not in cylinder heads but in casing, while short pushing rods were co-axial with valve pushers and did not bend. The designer made new cylinders, valves, pistons were with swollen bottoms that resulted in 7:1 ratio, lubrication system became “dry casing” type with double oil pump and a separate oil tank 3.5 litres capacity, which was a principal solution of cooling a high-tuned engine. Factory’s “general use” racing BMW RS39 were a lightened R51 models with tuned engine without charger, issued for races at low costs and simple design. Unique motorcycles with chargers (only for factory’s racers) had cylinder heads with two camshafts and conical tooth wheel drive for each head.

Such design made in metal was not of opportunity for “a soviet rocket builder” and Shumilkin’s Kometa-2 was equipped with screw charger driven by tooth wheels from front crankshaft end. Change of rotation direction of the charger made carburetor to be placed on left (not on right as factory BMW). Spirit mixture entered carburetor with 25mm diffusing chamber and then the charger pushed the mixture forward to cylinders via rather long ducts, 30mm diameter that also served as receivers (accumulating fuel/air mixture) but the engine was not responsive to throttle.

Ignition system had double spark magneto M-48B from a tractor starter and a reducing ratio gear was used for it as Kometa-2 engine raced to 6800-7000 rpm, 1.25 times more than top magneto rotation speed. With 494cc capacity and 0.9 atm (bar) charger pressure power output reached 41hp at 7000 rpm. The machine had no fairing, only a shield under the charger, carburetor and engine casing. Dry weight of the machine dropped to 152 kg wearing 3.50-19″ tires with off-road protector (!) as not other tires could have been found then. During 1946 USSR championship Shumilkin covered 1 km distance with flying start at average speed 169,093 km/h (lower than all-union record that he beat in 1948 with 175,953 km/h). The motorcycle handled on road badly as duplex frame design was not tough enough to provide sufficient torsional stiffness. Designers of racing BMW reinforced frames with two diagonal elements on left and right side under seat, Shumilkin preferred to solve this problem 3,00-21″ wheels with greater gyroscopic momentum. These together with brake drums were borrowed from DKW racing model “URS350”. Rear wheel suspension got friction shock absorbers, the engine was covered with guards and fairing on upper part of the machine.

With the same power and transmission ratio, bigger in diameter by 51mm wheels and better aerodynamics resulted in “higher flight speed”. In 1950, Shumilkin not only as a designer but as a racer covered 1 km strip with flying start 184,804 km/h. After that Shumilkin moved from Leningrad to Moscow to work at plant “ATE-2″. The master constantly experimented and tuned engine higher. He researched new mixtures of spirits fuel, increased carburetor diffusing chamber to 27 mm. So in 1946 he used spark plugs with heat rating 280 and by 1950 this increased to 420 with charger’s pressure 1,2 atm engine developed 50-55 hp at 6700-6800 rpm. To avoid overheating and breakage of exhaust valves, Shumilkin machined them filled with natrium (sodium, Na, atomic number 11) inside. A new achievement – absolute speed record of the USSR on 1km strip flying start, 204,894 km/h.

But there were difficulties also – a weak middle web of crankshaft, made with two semi-axes housed in compact design this could not have been made wider 19mm. Endless breakages of cast iron cylinder flange were solved by enforced anchor studs screwed deep into area of crankshaft housing, then aluminum alloy jacket cylinder with press-fitted cast iron sleeve was mounted and alloy head. Tied with nuts such “hamburger” made no trouble anymore.

Then turn came for valves and pistons improvement, intake valves diameter increased to 36mm and the valves made of heat stable steel alloy ZI-69 were not apt to overheating. Again chill-moulded pistons and enforced piston pins. But behind words “made”, “machined”, “installed” lies a vast research work done by an experimenter. Central experimental designers department of racing motorcycles in Serpukhov with N. Gutkin, E. Kulakov were working on the same problems, E.Lorent in Kharkov, J. Stepanov in Rostov, E. Ermanis in Riga, A. Silkin in Moscow were also working on engines for racing motorcycles of 500 and 750 cc categories. Each of them had his own secret and each sought his way. 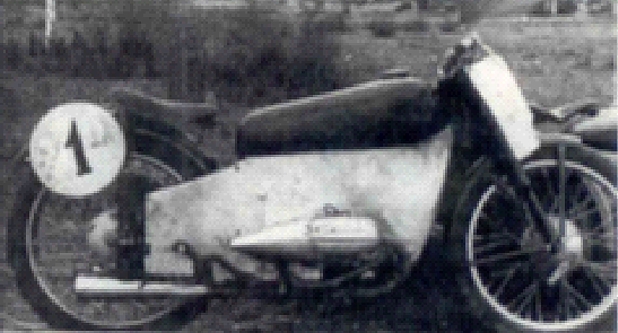 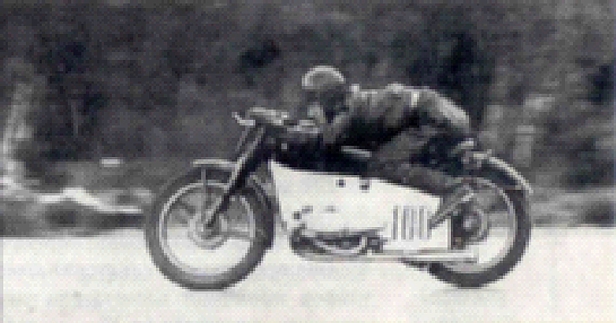 N.Shumilkin during record race in 1948, front fork fairing taken off, the racer is in a typical position providing lowest front drag. 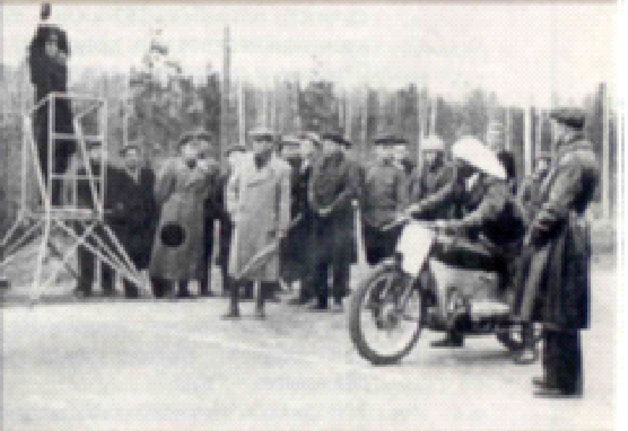 Next year persistent Shumilkin decreased compression ratio to 6:1, increased charger pressure to 1,4 atm. and got power output 70 hp at 6800-7000rpm. With a tail fairing mounted to his motorcycle he set new all-Union record – 211,765 km/h. Then the racer tested himself in sidecar motoraces with Kometa-2 mounted tube frame, a load and a wheel. Shumilkin set one more all-Union record -179,830 km/h.

Surprise was that top speed progression stopped. Two specialists from one of aircraft institutes in Moscow came up with idea of full fairing for the motorcycle. In 1.5 years, aluminum fairing designed by B. Blinov and A. Pesochin was mounted onto the machine that had to be welded on different mounts and arms, chassis were changed in design, the frame became longer with wheelbase 1620mm (instead of 1400mm) weight without fairing increased to 170kg. Kometa-3 length (named so after re-designing), was 4100mm, width -800mm, height-989mm. In 1954 “the 3rd” got new charger with same design while with one rotor revolution it supplied not 375cc of fuel mixture but 570cc, 1.5 times more! Methanol was used as fuel charger’s pressure varied from 1,3 to 1,8 atm, engine power was 85-90 hp at 9000 rpm. This all led to 198,019 kmh all-Union record for sidecar for motorcycles in 500cc category. At the end of the year top speed reached 223,663 km/h! 1km strip flying start it made at 134,579 km/h. 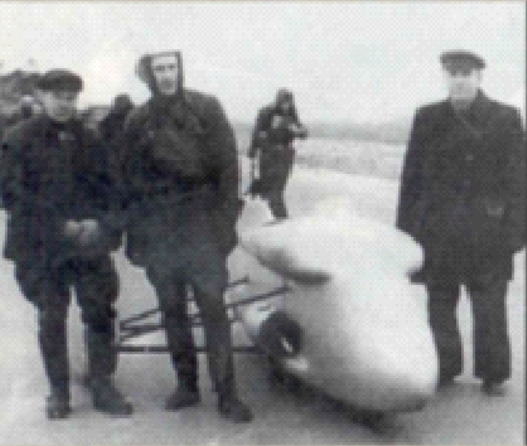 Pictured 22 May 1954 is a sidecar variant of Kometa-3, Shumilkin wears helmet, a mechanic near him.

a fairing of Blinov and Pesochin design, wheelsbase longer by 220mm, weight with fairing 200-205 kgs, panels of the fairing were mounted on tube arms. 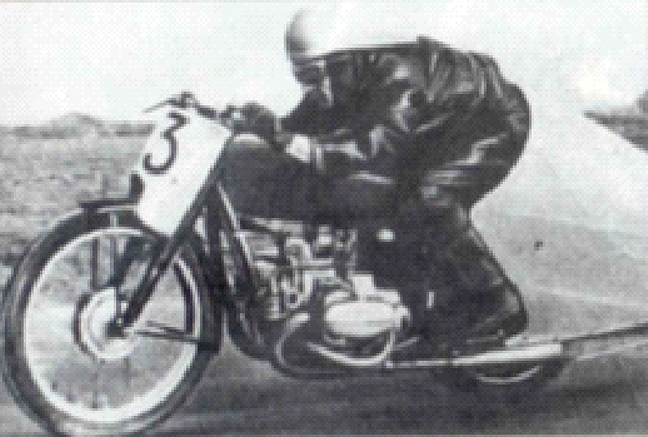 Kometa-2 with a tail fairing, 1952, Racer’s position was changed from that of 1948. A long duct from charger goes under cylinder to intake port. 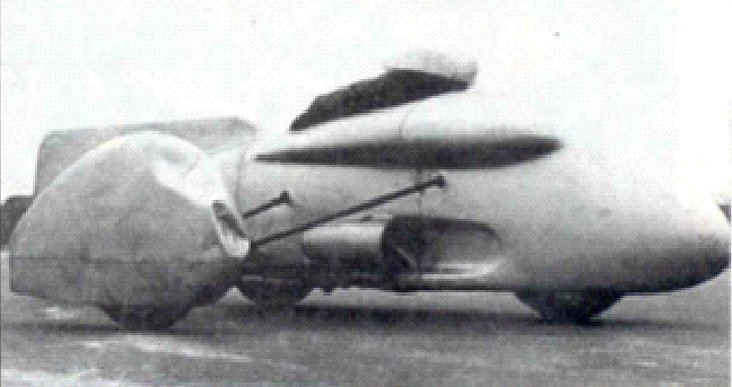 Soon the legendary mechanic and racer left the motorcycle sport because of age. But unsurpassed “feeling of metal” and great experience led him to a chairman post in one of quiet experimental departments. Shumilkin would look at a broken piece of metal attentively, rotate and test in his hands and then would say his verdict: “here fitting should be loosened, this must not be hardened but normalized, there diamond polishing should be applied…” And that all then worked well! But not without confusions, so when there came a new head of department, he started making his arrangements:” …and that one? Old man, 5 years of school education, file him on pension! Soon the department program began to run down and the head’s post was put to question. Shumilkin was brought back, several years passed and the craftsman was over 70 years of age. He realized that he succeeded in life all he wanted to and could not have done more than that, cocked a trigger of hunting rifle…

Nikolay Shumilkin holds a special post among our “kitchen designers”, he created machines that our well-known motorcycle factories were too way behind him in terms of technical design, achievements and speed records. His name was unfortunately quickly forgotten. Great Jotto’s house in Florence, Italy has a memory table with words: “his name is a long poem”, so name of Nikolay Shumilkin also is a poem about racing motorcycles. Remember this name, the name of a designer blessed by God.