Motorcycle plus crawler chassis – this combination gave a whole lot of advantages – lightness and reasonable speed of travel with increased ability to overcome obstacles in the field. Many builders have come up with this promising idea, such combined transport was built in many countries. Also in the USSR, Soviet engineers beginning in the 1930s, had been working on the use of vehicles of this type – primarily for the military.

One of the first such projects was created in the Red Army Special Forces Design and Production Office, headed by designer Paweł Ignatiewicz Grokhovskiy. He was known primarily as a popularizer and designer of gliders, parachute and landing techniques – from parachutes to motorcycle mounts and tanks under aircraft hulls. His office had developed a whole host of unusual aircraft, but also ground vehicles of unprecedented construction. Tanks-aerosan or tanks armed with missiles. 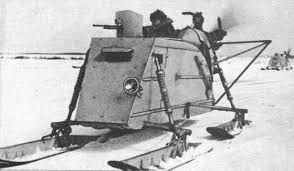 Many inventions Grokhovskiy personally tested, and his team was known as “Circus Grokhovskiy” due to the unusual character of the tests. In the early 1930s, Grokhovskiy presented an original armored motorcycle design with a semi- caterpillar chassis. The driver was able to watch the surrounding area through narrow holes in the turret and carry fire from the DP rifle. The rear drive, consisting of a crawler and two side stabilizing wheels, made it possible to overcome difficult terrain. 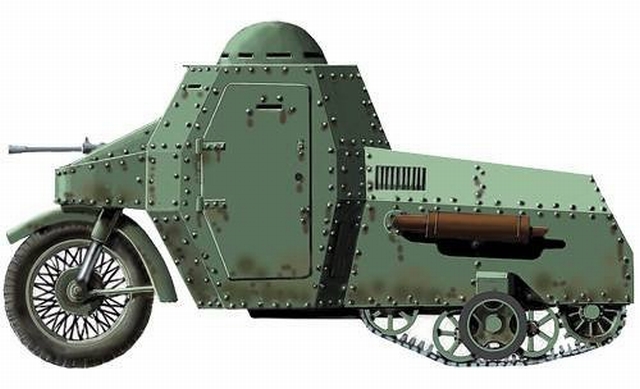 Unfortunately, the project was rejected at the development stage. Grokhovskiy, in spite of the huge number of projects developed by him, many of which had not kept up to date – was removed in 1937, and in 1942 he was repressed. He died at a farm in 1946.

Efforts in this field continued. In 1937-1938 research work was carried out by NAMI to further develop track-type motorcycles. The town of Kubinka, 63 kilometers west of Moscow, was the location of the Soviet Union’s top secret armour testing and tank proving grounds. The work was classified “extremely confidential” and carried out by the order of the Auto-Tank Office of the Red Army. The vehicle chosen was the L-300 production motorcycle (Leningrad, Rus. Л-300 ). 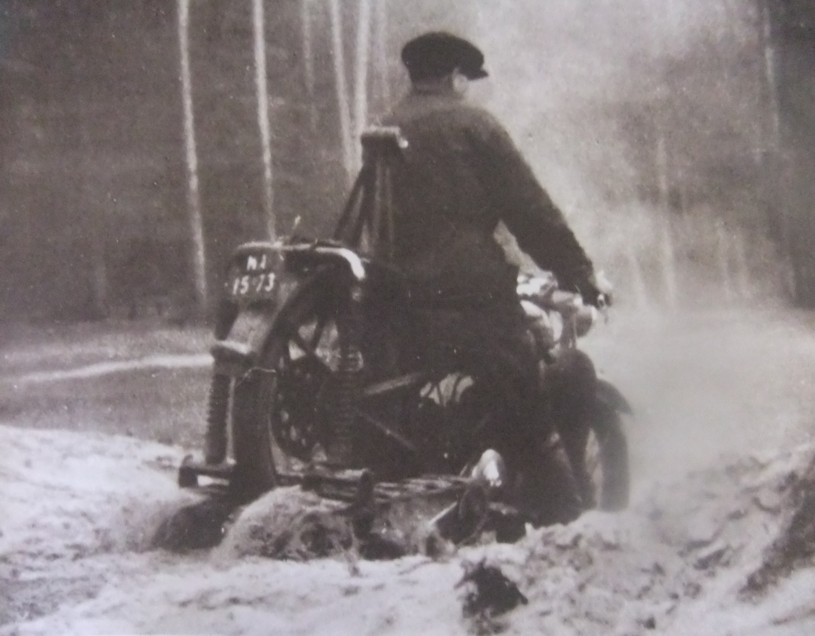 The track was mounted to the rear part of the motorcycle. It could be retracted allowing the motorcycle to operate as normal. It was engaged by the rear wheel spinning the drum which was driving the two rubber-metal tracks. Testing exposed numerous flaws of the bulky design lacking steerability, robustness and poor usability on norman roads as cornering was highly limited and the low power of the Л-300. The track design was further improved and in the summer of 1940 the modified device was mounted to a larger capacity Л-8 motorcycle. It was tested in September-October 1940 with the same unsatisfactory result, unstable and unsteerable. This put an end to the idea of a tracked motorcycle. Due to its secrecy no information was published. This data was found in the file of a former NAMI researcher.

above: Views of a modified Л-8 motorcycle showing tracks in both positions

The “Kettenkrad” deserves a mention here.

The German half-track NSU HK-101 (Sd.Kfz.2) with 4-cylinder Opel engine gained the name “Kettenkrad” (the tracked motorcycle). It was patented in June 1939 and produced from 1939 until production was stopped in 1944. It was designed and built by the NSU Werke AG at Neckarsulm, Germany. It was first used in the invasion of the Soviet Union in 1941. Later in the war Stoewer from Stettin also produced Kettenkrads under license, accounting for about 10% of the total production. Total production was around 8900 units, most were destroyed during the war.

Most Kettenkrads saw service on the Eastern Front, where they were used to lay communication cables, pull heavy loads and carry soldiers through the deep Russian mud. The vehicle was also used in the North African theater and on the Western Front.

Steering the Kettenkrad was accomplished by turning the handlebars: Up to a certain point, only the front wheel would steer the vehicle. A motion of the handlebars beyond that point would engage the track brakes to help make turns sharper. It was also possible to run the vehicle without the front wheel installed and this was recommended in extreme off-road conditions where speed would be kept low.

Being a tracked vehicle, the Kettenkrad could climb up to 24° in sand and even more on hard ground and had excellent cross-country capacity.
After the war production resumed at NSU and a further 550 were built for agricultural use. Production finally ended in 1948 (some sources say 1949).

During the Great Patriotic War (WW II) the Irbit Motorworks (IMZ) was also tasked with repair of vehicles, including captured German “Kettenkrad”.

The Russians undoubtedly appreciated the advantages and utility of this vehicle, as evidenced by their attempt to build their own analogous construction.

The designers of the Irbit vehicle did not succumb to the temptation to copy the vehicle of the enemy. The Kettenkrad’s design became only a starting point for their own design, which did not even look like the NSU HK-101. Experimental and structural work was carried out during the winter of 1943/44.In the surviving work documents of the factory in Irbit, the experimental specimen was referred to as a “crawler motorcycle”. Unlike the German design, it was a purely caterpillar vehicle, shorter and much lighter, because instead of the hull the “tub” had a skeleton of tubular pipes.

The designers tried to make the most of existing serial components. The M-72 motorcycle engine was used for the powerplant, which proved to be sufficient for a vehicle slightly over half a ton. The motorcycle front fork with a wheel was omitted, allowing the engine, gearbox and fuel tank to be compiled in the front of the hull, leaving plenty of space in the cockpit for a fairly comfortable driver and passenger position. The driver’s seat was a normal, rather deep seat, while the passenger seat was designated a two-seater couch. The driver had at his disposal an array with a minimum set of essential equipment. He was driving with a lever.

The original chassis of the crawler chassis was completely own fabricated. On each side were assembled two pairs of running rollers, connected in trolleys. Suspension was used. The driving wheels and the idler wheels were identical in design. Side gear, main gear and brakes were in the rear. The drive was on the rear axle. Rubber-metal track belts were used in the experimental machine, the same as in most Soviet half-track trucks. The tracks were fastened on a rubberized metal fabric cell with rubber cushions. IMZ engineers had managed to develop a completely compact and responsive machine that could successfully become a lightweight military tractor.

Unfortunately, the fate was different. Field trials, which began on February 12, 1944, ended in the first kilometre. The gear teeth of the main transmission broke. The failure could not be rectified on site, so it was decided to withdraw the vehicle from the tests and transport it back to the plant. The small part of the defect proved to be fatal to the project. The topic of the “crawler motorcycle” was not developed further, and its tracks remained only in the archives.

at least it looked good!