Top ten of the 20th century

…and the great “Werner” the way showed to us 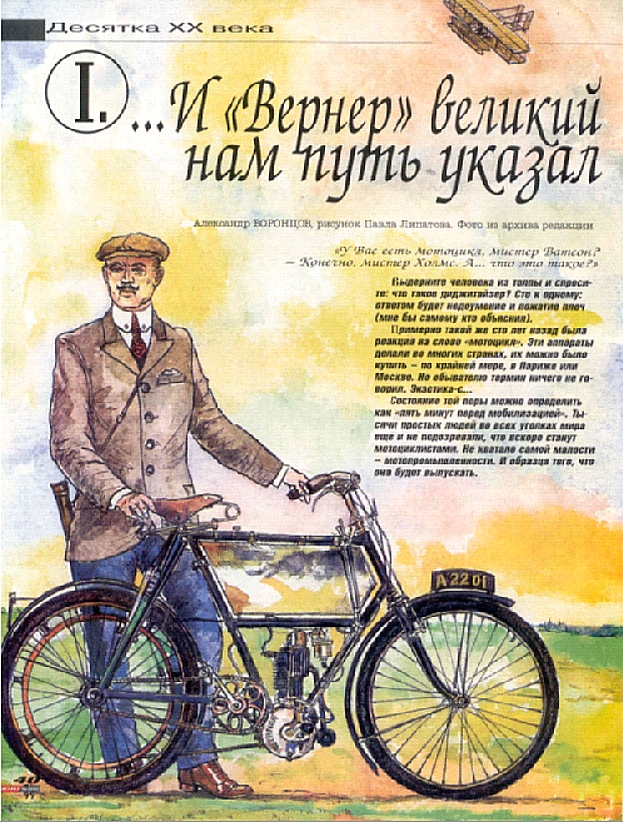 If you ask a man from a crowd what a digitizer is (I would like to know this myself), in 99 percent as an answer you will get embarrassment and shoulders shrug.

Nearly same answer reaction you would have seen a century ago if you had asked about “motorcycle”. These machines were being made in many countries and could have been bought at least in Paris or in Moscow. But ordinary people would not have known of this… This period of time could be defined as “ten minutes to mobilization”, as thousands of people around the world could not have guessed that soon they would become motorcyclists. For this just a little thing had to be made – motoindustry (Rus. motoprom) and a sample that this industry would produce. You may be proud, Russians! Machine that defined design of motorcycle for next few decades, as all foreign historians admit, was created by our former compatriots – Werner brothers. In 1901 they gave the world first motorcycle of a classic design with 4 stroke, single cylinder engine mounted in lower corner of a specially designed frame, a primitive vaporizing carburetor was not used (where air is enriched with petrol vapours in fuel tank), instead a usual for us diffusing carburetor (spray type) was installed. As for completely unreliable round section belt (leather I think) , a flat one was used, in those times this was same revolutionary decision as O-Ring chains nowadays. “Werner” motorcycle proved not only better in design compared to other motorcycles but also it was better in reliability. Namely this make won almost all races of the beginning of the 20th century, such as Paris-Wien and Paris-Berlin. As there came up a good sample, soon engines and motorcycles were made under Werners’ license all over Europe. And in a few years the number of motorcycle makers in the world was counted in hundreds! So motorcycle industry appeared and motorcycling became a mass event. 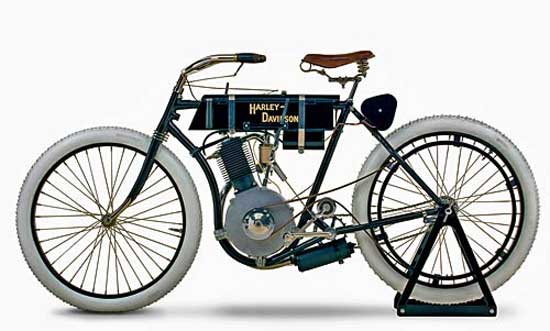 Let’s recall some more inventions and events of the beginning of the 20th century that greatly influenced development of the motorcycle. Bikers may make notes to remember year 1902 as Davidson brothers and William Harley built their first motorcycle in that year, though a single cylinder one. V-twin was first used on a motorcycle same year by a Frenchman Adolf Cleman. First in the world “supermotorcycle” – a Belgian “FN” of 1904 impressed people of those times with a four-cylinder engine and shaft final drive. Then tireless French invented … a scooter! At least presented in 1904 “Auto-Fauteuil” had all features of the style: engine placed under seat, comfort enhancement attempt , as seat was replaced by armchair with back and arm rests. 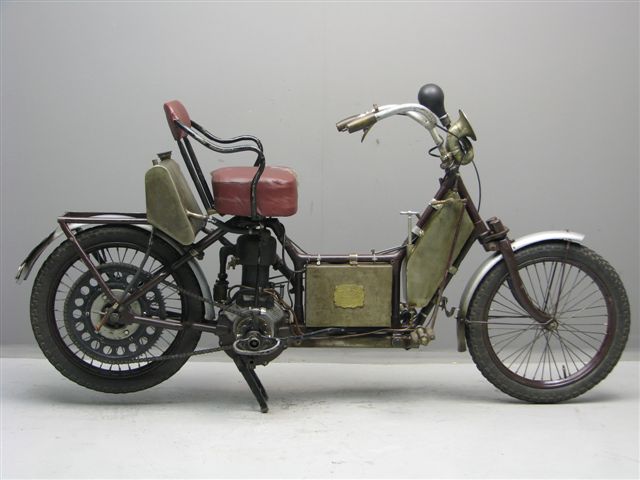 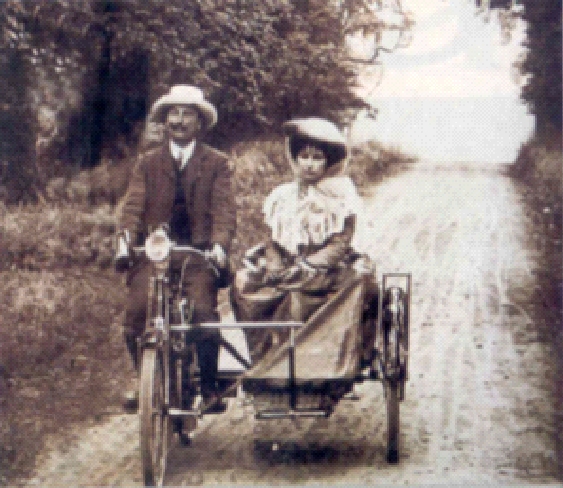 A motorcycle with sidecar, beginning of the 20th century.

A problem of passenger transportation was solved: instead of unsafe “forecars” (popular in the very beginning of the 20th century 3-wheeled vehicles where passenger is seated in front of driver between two wheels) a sidecar was mounted then. 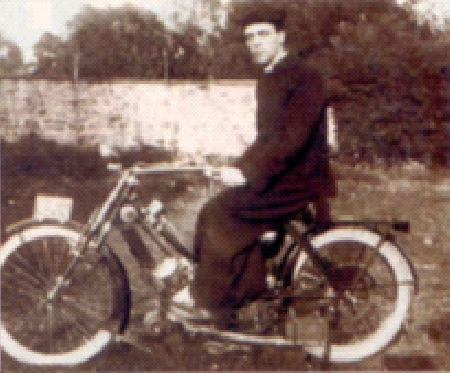 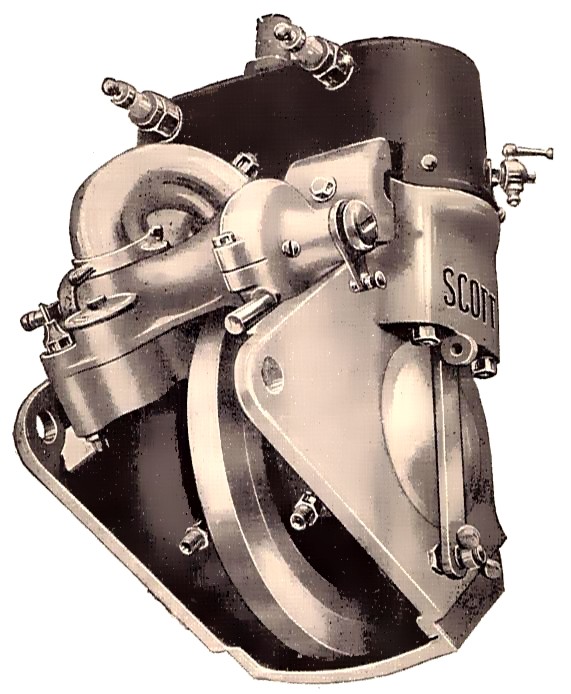 Inhabitants of the British Isles also played their role. In 1908 Alfred Scott built first working motorcycle with a liquid cooled 2-stroke engine. And a year before this the British held first “Tourist Trophy” on the Isle of Man, where ordinary motorcycles were racing as opposed to continental racing monsters unsuitable for rides on common roads. This became a decisive factor in development of motorcycles. Precisely, mountainous roads of the Isle of Man forced use of gearboxes and other devices to change transmission ratio (e.g. variator). Motorcycle was an international brainchild not only by birth, but also by bringing up. Irwin Tragatsch, a patriarch of motorcycle history wrote: “Werner brothers of Russian origin were probably the greatest pioneers of motorcycle industry”. To conclude, motorcycle is a true Russian people’s own thing.

©Translation for b-Cozz by Evgeny Radchenko 2013. Special thanks to Eugene. 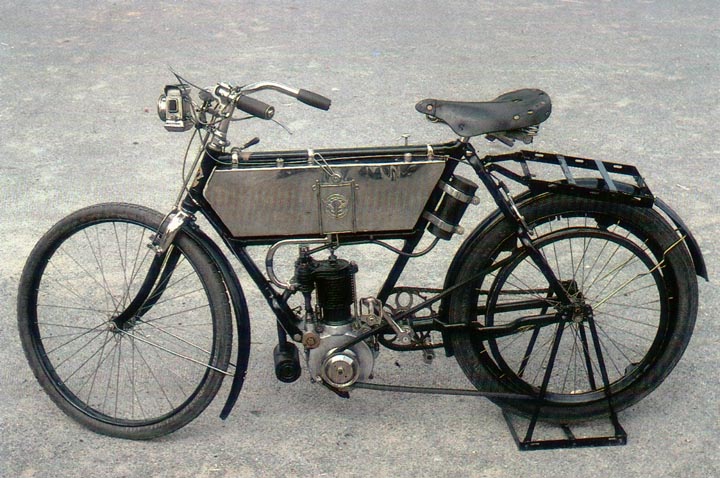 On January 7, 1898, the brothers Michel and Eugene Werner, two émigré Russian journalists, patented their “Motocyclette” powered two-wheeler, which had its engine mounted above the steering head, driving the front wheel by belt. They had already built two prototypes.

Far-sighted businessmen and prolific inventors, the Werner brothers applied for patent after patent – typewriters, phonographs, cinematographs and motorcycles were their main fields of endeavor. They experimented with various engine locations before unveiling their masterpiece at the 1901 Cycle & Motor Show in Paris. The “New Werner” was the first practical powered two-wheeler with the engine mounted in the classic bottom-bracket position. Though others had experimented with this location, the Werners were the first to consider it worth patenting and to issue licenses for its use. Despite that the Werner Company failed in 1908 after the death of Michel at the early age of 46. The brothers had invested their money in Russian Securities, which suddenly collapsed, and Eugene Werner was ruined.

Werners were very successful in early competitions; their star rider, Auguste Buquet’s New Werner, was the first of seven motorcycles to finish in the 554-mile Circuit du Nord race in 1902: his time was less than 34 hours! The following year, Buquet was the first motorcyclist to finish the marathon 870-mile. Paris-Vienna race, coming in fifth overall.

The French “Auto-Fauteuil” was introduced in 1902. Production ceased in 1922.